Best Seller 1975 Ratings (5.0)
Besant Technologies offers JMeter Training in Chennai with lowest fees cost compared to the other training institutes in Chennai. We provide JMeter training from baseline to high end with practical knowledge with practical sessions. Training will be provided by corporate employees from reputed companies like Renault Nissan, TCS, Wipro, Cognizant, and Infosys so and so.
Get Free Live Videos 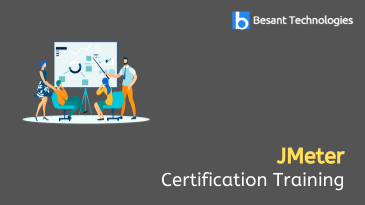 Available 24x7 for your queries
Request a Demo

JMeter is a trendy open source Performance Testing tool developed by Apache Software Foundation. Using this tool, we could able to do load testing, functional testing, regression testing, automation testing, stress testing, endurance testing, Database Testing and Server Monitoring so and so. We are covering every parts in our JMeter Training in Chennai

How JMeter helps in Performance Testing?

Scope of JMeter outside World?

If you are working on any corporate companies, you could have surely heard the word called “Cost Cutting” or “Cost Effective”.

Yes, Most of the companies outside are trying to replace commercial tools with open source tools.
Many companies started R&D’s as well.

For Performance Testing, the widely used tool is Load Runner®, which is a high cost commercial tool. Now, to replace this, JMeter comes into picture. JMeter offers 90% of the functionality, that the load runner provides. Hence, companies started looking for JMeter resources and they are ready to pay for them which will be cost effective compared to the money spent for buying commercial tools.

Who can make use of our JMeter Training in Chennai?

Testing professionals, who are working in baseline testing like manual testing? In those people who ever are willing to move one step ahead in their career to performance testing as it is having a wide range of scope in the market.

To enter, into such market, JMeter will be a stepping stone to them.

How to do scripting with Recording and Replay Functionality:

Other Important Features of JMeter that we cover:

By the End of the Session:

Besant Technologies provides flexible timings to all our students. Here are the JMeter Training Classes in Chennai Schedule in our branches. If this schedule doesn’t match please let us know. We will try to arrange appropriate timings based on your flexible timings.

Request a Callback
Scroll Up