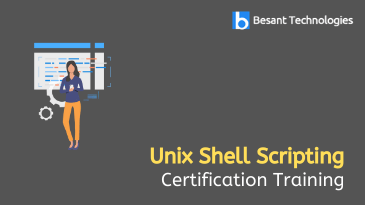 The Unix Shell Scripting certification training course modules are curated by Besant technologies professionals who stay updated about the latest trends and technologies. Our instructors focus on both practical and theoretical classes so that the candidate gets to know the concept clearly without hassle. The real-time industry-based projects, scenarios, hands-on training, and case studies make the training smarter, and also it’s easy for the candidate to understand the concept in a more natural way.

The Unix Shell Scripting online certification helps to make the candidate clear about the Command usage, directory structure, and architecture of Unix operating system, learn how to make use of the Putty tool to connect Unix server, know about various flavors of Unix, file system layout, how to access Unix server and more.

The candidates will be provided with primary, intermediate, and advanced real-time tasks and projects in Unix so that they can learn the Scripting language quickly. The candidate will get to know about how to implement automation with the help of Unix shell script, work with different logics, overcome solutions by decreasing time when compared to windows, and more.

Besant Technologies provides flexible timings to all our students. Here is the Unix Shell Scripting Training  Schedule in our branches. If this schedule doesn’t match please let us know. We will try to arrange appropriate timings based on your flexible timings.

I’ve Joined for Unix Shell Scripting Training classes in Besant Technologies. All topics are covered step by step fully practical based. So we can learn easily. Especially trainers are a good friendly manner any doubts we can ask at the time he will practically explain all our queries. Definitely, everyone gets interested in the First day itself.