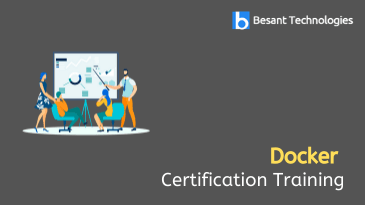 According to Payscale.com, the average salary for the professional with Docker Skill is about 859K. Completing the Docker Certification Training Online successfully from Besant Technologies will get you a Docker course completion certification at the end of the course. The online docker course is trained with qualified professionals who are experts with a decade of experience in their respective fields.

The Docker certification training course from Besant Technologies is curated by highly experienced experts so that every latest industry trends and updates are covered in the syllabus. The docker online training from the professionals helps the candidate to gain insight into different containerization technology aspects through real-time projects and scenarios.

The Docker certification training course will master the running containerized applications aspects from already present images, installing, operating, and maintaining the docker platform, deploying images on the cluster, and more with the help of real-life projects and hands-on experience.

What will you learn in this Docker Training Course?

The Docker certification training course offers an end to end, and powerful learning experience of comprehensive technologies and methodologies used in the Docker platform, including Docker, compose docker containers, docker images, docker engines, and more. Apart from them, the docker online training will help the candidates to perform the following aspect at the end of the Docker training and Certification course.

Who should take up this Docker Training and Certification Course?

The Docker online training from Besant Technologies is suitable for

What are the Prerequisites for Learning Docker?

Students and professionals who possess the following prerequisites are capable of attending Docker training and Certification course from Besant Technologies.

Even though you don’t possess the above pre-requisites, Besant Technologies holds trainers who help the candidate to be clear in every concept and achieve a successful career in Docker.

Why should you take up this Docker Online Training?

There is plenty of reason why you should go with Docker certification training course to be successful.

What is Docker used for?

Docker is a tool developed to provide significant benefits to both system administrators and developers make it an essential part of different toolchains in DevOps (developers+operations).

For system administrators, the Docker provides flexibility and credibility. It also decreases the total number of systems required, potentially due to its lower overhead and small footprint.

For Developers, docker helps them to focus on writing simple codes without any worries about the system that runs on. The developers can make use of the programs that are already running inside the docker containers as a vital part of their applications.

The advantages of Dockers are many. Here are a few of them.

Besant Technologies provides flexible timings to all our students. Here is the Docker Online Training Schedule in our branches. If this schedule doesn’t match please let us know. We will try to arrange appropriate timings based on your flexible timings.

I had a fantastic experience learning Docker online course from Besant Technologies. Every trainee is very knowledgeable. They covered every concept with real-world projects that made us transparently understand the idea. I am happy to be a part of the Besant technologies, and I strongly recommend them to other students who need to have a good career in docker.

I would recommend the Besant Technologies Docker training and Certification course for both beginners and experienced experts. As the trainers move the concepts as per the student’s capability, everyone can easily get certified as a docker professional.

I want to thank and appreciate the trainee who trained me in the Docker Certification Training Online. His patience and dedication made me learn things quickly and easily. I am happy that I am placed in a top MNC Company. Thanks to all who supported me in the Besant Technologies.

I enjoyed the Docker certification course from Besant Technologies. All queries I asked were clearly explained with examples, and I am 100% with the overall features.

I would recommend Besant Technologies for every aspiring candidate who needs to make a career in data science. The trainers who trained Online Docker Course thoroughly impressed me with this training session. The session was beneficial to make my job and career success.