1861 Ratings (5.0)
Software testing the process of evaluation of the product, to detect the difference between the output and the predefined requirement. It also includes the quality test and the error check. The software tester should first consider what the product is. He should also know all the requirements and the workflow. During the development phase, he should test every possible case. It can be done in different ways and different tools. 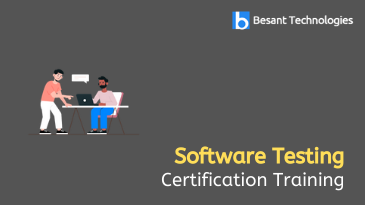 Software testing training in Pune organized by Besant Technologies is focusing on the best tool to do the testing. Also, the training is intending to make the candidate to compete in the fast running world.

Testing can also be called as verification and validation phase of a project life cycle. Verification means the tester should verify whether all the necessary requirements are included in the product. Testing can be done between the development phases which will decrease the total burden. There are two types of testing which include Blackbox and Whitebox testing. In Blackbox testing, we will consider only the output. The internal structure and codes are not considered. In Whitebox testing, we will consider the internal mechanism of the system too.

Get enrolled for the most demanding skill in the world. Software Testing Training in Pune will make your career a new height. We at Besant technologies provide you with an excellent platform to learn and explore the subject from industry experts. We help students to dream high and achieve it.

Besant Technologies provides flexible timings to all our students. Here is the Software Testing Training in Pune Schedule in our branches. If this schedule doesn’t match please let us know. We will try to arrange appropriate timings based on your flexible timings.

Training Locations in Other Cities