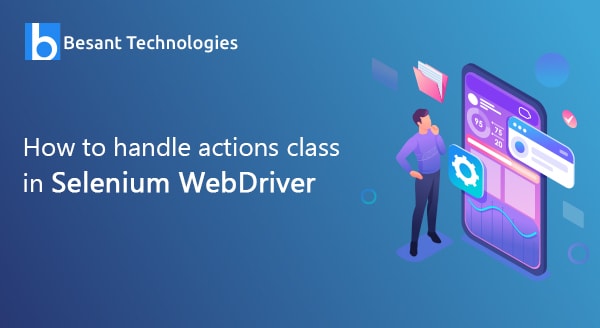 How to handle Actions Class in Selenium WebDriver

How to handle Actions Class in Selenium WebDriver

Selenium is a very powerful tool that has various inbuilt abilities in order to handle unique types of events which are both keyboard and mouse. Also, you have to clearly understand that the reference for a web driver does not work separately. In order for us to perform actions related to the mouse, we have to learn to use the Action class.

Actions are the operations that we perform on the web elements in a selenium web driver.   For us to perform any action like clicking a button, entering text in a text box, click the dropdown menu, selecting an option from the drop-down menu and so on, we first need an action class. The following article will help you in understanding in detail about Action classes and their working.

An action class is a default ability that is built in by nature targeted to handle the numerous types of mouse and keyboard operations and events. The operations like clicking, dragging, dropping, selecting by using a control key are performed via advanced API. Actions are the main components responsible for the operations.

The ideal solution is to directly use the action class which is the API responsible for invoking action events instead of using input devices.

By using the actions API, all the keyboard operations can be easily handled by using a web driver. By extracting the location of the web element and by performing some operation on it, we can start using mouse actions.

The main two types of methods available under actions in Selenium are mouse and keyboard interface.

sendKeys() – The Sendkeys() method is responsible for sending a continuous series of keystrokes.

Doubleclick() – used to perform double clicks on a web element.

Release() – used to release the button that has been kept pressed.

Clickandhold() – used to perform press operation at the place where mouse is present.

Contextclick() – used to perform a right click operation at the exact place where the mouse is present.

Draganddrop() – used to perform click operation from the source location and performs drag operation to the destination location.

In order to handle actions, you have to create an object of class Action. Perform actions on the elements, use build().perform() to perform compilation and execution. Also, they begin to use different methods to handle different actions and operations.

The contrast between Actions and Action

Actions are basically a type of class that is basically a user focusing API which is mainly focused on comprehending user gestures and their emulation.

On the alternate side, Action is basically an interface that refers to a single user-related interaction.

In order for you to handle an action class, one must first understand the usage and methods. Also, a distinct format needs to be followed.

First import the necessary packages which are related to the actions you are going to perform.

Then instantiate the action class to enable the usage of the methods that come under it. Also, one additional point is that one also needs the web driver object to perform this instantiation action.

Generate the sequence of actions by invoking a series of different actions serially. The method called keydown is used to perform a key press operation, whereas on the other hand the key method is used in order to release a key that has been in a pressed state for long.

Now build an action sequence by the means of the build() to produce a composite action.

Finally the last step is to perform the action sequence that has been built so far by the means of the perform(). Once this is finished, the action will be visible on the browser.