1950 Ratings (5.0)
Puppet is strapping and flexible coding language for automation through which a programmer can easily control tangled networks and environments. The Puppet Training in Pune offered by Besant Technologies is paving a way for the interested applicants to get deep knowledge in the same. The coaching will be starting with the Puppet infrastructure which is comprised of Puppet Agents and Masters, which will lead you to Puppet Run Cycle later. In the next level, we will be covering the Puppet language in detail. It will include Puppet Type and Puppet Manifest. 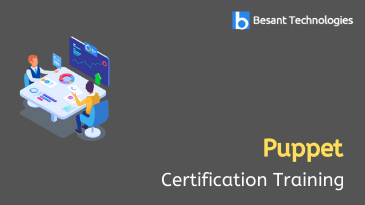 Get enrolled for the most demanding skill in the world. Puppet Training in Pune will make your career a new height. We at Besant technologies provide you with an excellent platform to learn and explore the subject from industry experts. We help students to dream high and achieve it. We can apply the normal conditional logic in Puppet, which needs to study Syntax. The trainer will lead you to get used to it. In the next level, we will introduce the techniques to organize a Puppet environment and MCollective.  At the end of the training, you will become capable to work with the External Node Classifiers and Puppet Dashboard.

Puppet is an Open Source system management tool for configuring and managing servers. It can handle the information update that depicts enterprise hardware and software. Puppet has got two layers namely the Configuration layer and the Abstraction layer. The Configuration layer will decide how the hosts and services will appear and the Abstraction layer will give permission to the Admin to implement the configuration Unix, Linux, OS X, and Windows. Puppet uses Master-Slave Architecture which communicates through a secured channel called SSL. The complete Architecture will be covered in the Puppet Training which will be taking place in Pune.

Puppet is written in the programming language called Ruby and has its own Domain Specific Language (DSL) to describe and manage modules. Apart from that, the Puppet Website offers a number of community modules that manage infrastructure as code. Major Puppet modules include:

Syllabus of Puppet Training in Pune

The course comprises various sections to be learned as follows:

Besant Technologies provides flexible timings to all our students. Here are the Puppet Training in Pune Schedule in our branches. If this schedule doesn’t match please let us know. We will try to arrange appropriate timings based on your flexible timings.