1965 Ratings (5.0)
Swift is an attractive way of coding desktops, mobile phones, and servers developed by Apple Inc. For a beginner in coding, Swift is absolutely easy with simple codes writing in the playgrounds and it doesn’t require much time for the execution. 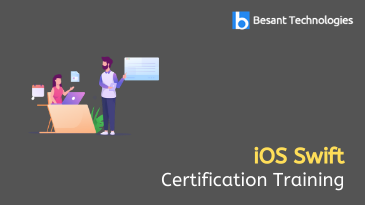 iOS Swift Training in Pune by Besant Technologies focuses on the new version of Swift which in the next level makes the learner capable of developing applications by themselves. In the usual programming languages, large classes are defined which cannot see in Swift. It contains the new programming patterns. It was in the year 2014 that the company released Swift and it is growing faster. Their main intention is making the coding easier as possible. Swift is the successor of C and Objective C which are now familiar. Swift is a rapid language with simplified syntax and semantics. It requires less code to do the same task compared to Objective C.  It is glorified with Automatic Reference Counting (ARC) which will manage all the memory-related issues that make the developer some free time.Get enrolled for the most demanding skill in the world. iOS Training in Pune will make your career a new height. We at Besant technologies provide you with an excellent platform to learn and explore the subject from industry experts. We help students to dream high and achieve it.

In Swift, we declare a variable with var and constants with let keyword. The keyword let is used to store a value that won’t change and var uses as the keyword that will change. For naming the variable and constant, we can use any characters and even the emoji. Another interesting feature of Swift is that we don’t need to specify the variable type, but the compiler will deduce it automatically by examining the value that we give. This feature is called as Type inference. This makes the declaration part quite easy. We don’t need the semicolon to put at the end of each code. In other programming languages if you don’t do it, then the compilation error will occur. But in Swift, there is no need of the same. We can declare the string as ‘String’ here and can declare it as either constant or variable.

Here the String functions are also very easy. We can concatenate strings using ‘+’ operator. String comparison can also be done by ‘==’ operator. Regarding the array, we can store only one type of data in it and here also we don’t need to declare the type. Swift will identify it automatically. The operations in the array are also done by using the mathematical operators. Swift has got three collection types. It is classified as arrays, dictionaries, and sets. iOS Swift Training in Pune is obsessed with the total version and detailing which makes the candidates easier to understand. The coaching will be started from the basics to clear all the doubts that may occur in you.

What is Swift Playground?

It is an interesting app for iPad which makes the Swift learning quite amazing. In order to work on it, you need not to know the coding skills, hence in the beginning candidates can try it out. Ios Training in Pune will be starting using the playground so that the learners will be able to solve the puzzles which in turn increase the knowledge in the Swift basics. This app is comprised of Apple-designed lessons which can be completed using the Swift fundamentals. The 3D world will make it more appealing. After that, you can go to the advanced level. In this app, you will be doing the same code that a professional is doing. But it is in the form of a playful type. There is a built-in library of lesson here and each time new challenges are added which will sharpen your skills.

Why should you take iOS Swift Certification?

While going through a certification course, you will attain the knowledge which you can’t get by taking normal studies. iOS training in Pune is targeting the systematic learning process to cover the important portions from the base to the advancement. Also, the candidate should take an effort to polish his awareness on the topic. To get the certificate, the learner should pass the formal test under the controlled conditions and is valid only to a specific period of time. There are different types of Swift certifications which include:

Besant Technologies provides flexible timings to all our students. Here are the iOS Training in Pune Schedule in our branches. If this schedule doesn’t match please let us know. We will try to arrange appropriate timings based on your flexible timings