1865 Ratings (5.0)
Getting a Valid Docker training certificate with experience in Docker technologies like Hub, Compose, Dockerfile, Containers, Swarm, Docker engine, Images, Daemon and Docker storage along with the case studies is not just a simple scenario in the professional world. It improves the overall chances to the candidates to get placed in the huge IT firms. Well qualified Docker Training in Pune handled by Besant Technologies is opening the rare window through which you can attain the finest knowledge. 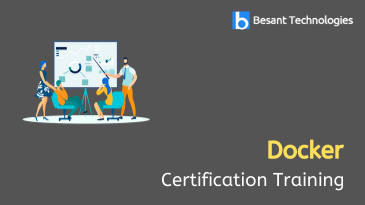 Get enrolled for the most demanding skill in the world. Docker Training in Pune will make your career a new height. We at Besant technologies provide you with an excellent platform to learn and explore the subject from industry experts. We help students to dream high and achieve it.

Docker is considered an open platform used by developers and system administrators to create, deploy and run distributed applications. It mainly comprises of a Docker engine, a lightweight packaging tool, a Docker hub and a cloud for automation and application sharing. Docker is an effective tool to assemble the app components by eliminating the time lapse between development, testing, QA and production. Hence the performance of the applications won’t change with the underlying machine.

Docker can be called as a Virtual Machine in many aspects. But the difference is that unlike VM, Dockers allows applications to use the system kernel were the original VM creates a whole new virtual Operating System. These techniques boost the overall performance and decrease the size of the application. Being an open source, the user can customize the Docker by considering his requirements.

Syllabus of Docker Training in Pune

Contributing to the ecosystem

Besant Technologies provides flexible timings to all our students. Here are the Docker Training in Pune Schedule in our branches. If this schedule doesn’t match please let us know. We will try to arrange appropriate timings based on your flexible timings.