1960 Ratings (5.0)
Ansible is an open source automation platform that can help you with configuration management, task automation, and application deployment. Ansible training in Pune carried out by Besant Technologies is intended for System Administrators to make their tasks easier. The training will be covering the complete layers including installation and configuration of Ansible, creation and running of the playbook to configure systems and will demonstrate how to manage inventories. In the next level, the candidate will learn how to manage encryption for Ansible using Ansible Vault and the same time, they will be experienced in deploying Ansible Tower for managing the systems. 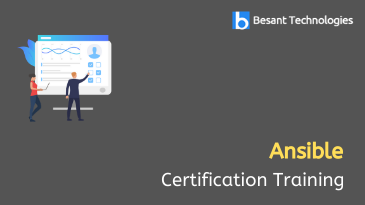 Get enrolled for the most demanding skill in the world. Ansible Training in Pune will make your career a new height. We at Besant technologies provide you with an excellent platform to learn and explore the subject from industry experts. We help students to dream high and achieve it.

As we discussed earlier, Ansible is an IT automation engine that will improve the overall performance and environment of your workspace. Ansible can automate three different types of tasks. First one is provisioning which setups various servers in the infrastructure. Next is the configuration management that makes changes in the configuration of applications. It consists of start and stops of services, installation, and updating of applications, implementing security policies etc. Ansible can be used in the IT environments which are hosted in the traditional bare metal servers, virtualization platforms and even in the cloud.

We are aware that usage of Puppet or Chef needs an agent in the remote host, but Ansible doesn’t need such a setup. Instead, we are supposed to use SSH and we can install it on the systems that are meant to manage. It is managed using Python and hence it must be installed in the remote host, which implies we don’t need to create a Client-Server environment to run Ansible. And, at the same hand, we can just run the machine, which makes the client feel like there is no Ansible Server.

We have got an Ansible Automation Engine which consists of Inventories, APIs, Modules, Plugins, networking, and hosts, Playbooks, CMDB and Cloud. Inventories are the list of nodes along with the IP addresses and servers. APIs in Ansible is used to transport cloud services. Modules are controlled directly by the playbooks. It can control packages, services, and commands. Next are plugins which are pieces of code that control the core functionalities. Main plugins are Action, Cache and Callback. CMDB is a repository which acts as a data warehouse for the installations. The Ansible Training in Pune will include all the main portions of Ansible for no doubt. And, at the end of the course, a test will be conducted to sharpen the ideas.

Preparing for Ansible back at work

Besant Technologies provides flexible timings to all our students. Here are the Ansible Training in Pune Schedule in our branches. If this schedule doesn’t match please let us know. We will try to arrange appropriate timings based on your flexible timings.