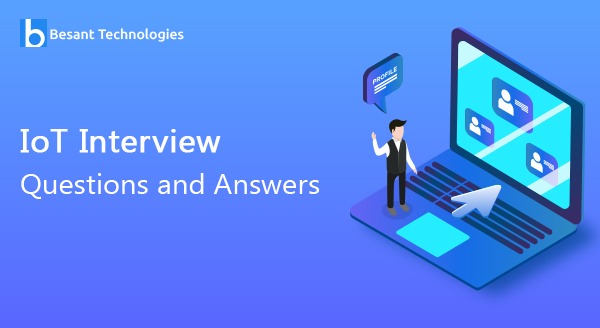 Internet of Things is the best thing from the year of 2016, because of more sensors, internet-connected devices where launched and in use. IoT is being and always important topic and course, which has widely more job openings and more jobs in a field like Mobile develop, Cars, Household use products and everywhere there is connected with the Internet. In this article, we Besant Technologies has picked up the best and top 50 IoT interview questions and answers.

Besant Technologies tutors are highly skilled and experienced professional with many years of working as a developer in top MNC companies and have received many excellence awards for training.

Do go through this IoT interview questions and answers, get placed in top MNC company and have a happy carrier.

Q1). What are the most used sensors types in IoT
Q2). How did you detect fire, which sensor is suitable?

I will use a smoke sensor which detects fire and smoke

Q3). How did you measure the voltage using sensors?

I will use Thermocouples which is used for measuring the voltage.

Q4). How did the Thermocouples work?

Q5). What are the sensors can be used in Agriculture?

Q6). What is the purpose of Airflow sensors?

It used to measure the air level in the soil, we can measure it from the one location or dynamically get from multiple places from the garden.

Q7). How to did you make small radar? is it possible?

Yes its possible, by using ultrasonic sensor we can make our own radar, which is detected object presence and distance

Q8). How did you check the quality of water?

Using Water quality sensors, I can detect the quality of water.

Q9). Can you list out some of the water sensors?

Q10). Do you have a better idea for the saving electricity?

Yes I have, by using light detecting sensors we can switch off street light automatically, which saves a lot of electricity

Q11). What are suitable databases for IoT?

and some more databases available, but these are the most used suitably for IOT

Q12). What are the features of influxDB?

It’s a programmable my controller, it used to sense and control the electronic devices programmatically.

Arduino: A Openly programmable USB microController, it can execute only one program at a time.

Raspberry Pi: A credit card sized computer, we can run multiple programs at a time and it has more computing power compared to Arduino.

Q16). What is mean by Raspberry pi zero?

Pi zero is the latest minimized version of Raspberry Pi, it costs is only 5$.

Q17). Mostly used protocols in IOT?
Q18). What is the abbreviation of MQTT?

Q19). What is the Purpose of MQTT protocol?

Its provide the connectivity between application and middleware from net side networks to another side networks.

Q20). What is the role of publishers in IOT?

Publishers are the lightweight sensor that sends the Real-time data to middleware or intermediate devices.

Subscribers are the application which is interested in collected real-time data from the sensors.

Q22). How did you program the Arduino?

By using Arduino IDE, I can program the Arduino. And another method I can use Node.js Johny five module to control Arduino

Q23). If its possible to control the keyboard using Arduino?

A library is the collection of code, which is already written for controlling the sensor or module.

Q25). How did you install a new library in Arduino?

In Arduino Select Include library from the Sketch option in Toolbar, It will open File Explorer, select library install from the location. That’s it.

Q26). Meaning of Sketch in Arduino?

In Arduino, each unit of code called as Sketch which is uploaded and run on the Board.

Q27). Its possible reduce the size of my sketch?

Yes its possible, by Removing unused libraries from the top of the code and make our code very simple and short, Then only we can reduce the size of the sketch.

Q28). How did you control the Arduino using python?

Q29). List some of wearable Arduino boards?
Q30). How is host the web server using Arduino?

Using the Arduino Ethernet shield we can host the web server in Arduino.

Q36). Which module is used to control the gpio in python?

Gpiozero is used to control the gpio pins in Raspberry Pi. By using this we can control button, LED, Robot and more things are possible.

Q37). Why should I prepare MongoDB for IOT compared to other databases?

Its the document model based storage database. Hence its faster compared to other databases, Rather than that its support more than 20 programming language support for integration.

Q38). What is the programming language supported by MongoDB?

Q39). What is mean by aggregation in MongoDB?

Its process of data and return the computed values. for more information: https://docs.mongodb.com/manual/core/map-reduce/

Sharding is Split data into multiple collections and store it in the multiple machines.

Replication is the act of sync data between multiple servers, which makes MongoDB as high availability.

Q42). Explain how did you store the High volume file like video or audio files into Arduino?

Using Gridfs is the specification used for storing and retrieving the audio or video file from MongoDB.

Q43). Can you write a query to insert the data into MongoDB?

Here YourIOTcollectionname is the name of your collection.

Q44). Explain how did you insert bulk data in MongoDB, can write the query for that?

Control the robot by Hand gesture (like an iron man)

Q49). How many pins are available in Arduino UNO board?

Totally 28 pins are available, for pin names please find at this link https://www.arduino.cc/en/Hacking/PinMapping168

Raspberry Pi 3 B+. for its features please refer this link http://socialcompare.com/en/review/raspberry-pi-3-b-plus.

Ans: IOT is nothing but Internet Of Things .It huge interconnected network between the objects to detect the different scenarios. It can be possible in local servers and global servers with respect to the IP/TCP Protocols

Q53). How many types we can consider IOT?

Q54). What is the impact of IOT in our Regular Life?

Ans: As name suggest internet network plays an important in IOT implementation to connect the millions of the objects to each other

Q56). Is it IOT will success in coming decades?

Q57). What are the requirements to IOT?

Ans:Hardware: This will makes the normal devices as intelligent and smart devices, read the data in time
Software: Process the collected and store data from the device and it manipulate as the requirement
Infrastructure: Here it more essential communication infrastructure which are Technology and protocols to exchange the data.

Q58). What are the popular hardware proto types are using in IOT?

Q59). What is the popular software IDEs are using in IoT?

Ans: Each and every prototype device family having their own development IDEs I.e Arduino IDE, Keil Id, Gcc compilers etc.

Q60). What are the Organizations Support the IoT?

For better training and coaching for the Internet of Things, do pursue in Besant Technologies and get the best from us. These top 50 IoT interview questions and answers will help you to clear out the interview and also helps you to some quick knowledge in IoT.