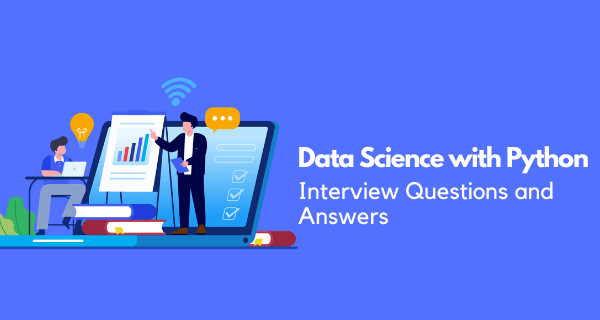 Q1) What is supervised learning?

Ans:  Supervised learning means learning from example. We have data and we have output too and we train a model to predict that output based on the feature columns we already have.

Q2) What is exploratory data analysis?

Ans:  EDA is basically a graphical interpretation of data. We perform different analysis and frame our data to give insightful results using EDA.

Q3) Which is your favorite algorithm and why?

Q4) Where is logistic regression used?

Ans:  Logistic regression is used when the target variable is categorical and not continuous. eg, email spam detection,  yes/no type.

It works on the probability of an event rather than predicting values.

Q5) Which command is used to know basic statistics of data in one go ?

Ans:  p-value is a statistical value of how your data is matching with null hypothesis.

Q7) What is the confusion matrix?

Ans:  Confusion matrix is for classification problems and it helps to understand the model through its various metrics and how well it generalized the test data

Q8) What is hypothesis testing?

Q9) What is imputation?

Ans :  Imputation is the way to replace missing and null values with the value suitable according to data sample. For non-normal or non-Gaussian type of data , generally median or mean is used for imputation. For nearly normally distributed data, the mode is correct value of imputation.

Sometimes, imputation also depends on dataset and can be a random value.

Ans:  Sometimes, some data points are either too small or too big from the normal data points available in the dataset. These are called outliers

Q11) What is precision and recall?

Ans :  In simple words , precision tells you predict something positive, how many times its actually positive and recall tells out of actual positive data , how many times we predicted correctly

Ans :  k-NN algorithm is a supervised algorithm where we determine a constant value k and classify a  data point within a vicinity of k data points to which class it actually belongs to.

Q13) What is bias-variance trade-off?

Ans :  Bias-variance trade-off is like a see-saw . When data exhibits higher variance , bias is increased to reduce variance and vice-versa. When model is simple and features are minimal , then it shows high bias and low variance and when model has too many features then it shows low bias and high variance

Q15) Which plot is suitable to detect outliers?

Q16) Why computation of NumPy is faster than list or loops( if or else )
Q17) Is it possible to do positional and label based indexing of a data frame(df) ?

Q18) Is it a good practice to replace the null values present in the data frame ?

Q19) What are the different types of joins? and which join is preferred for joining databases ?

Q20) What is the difference between ordered and unordered categorical variables?

Q21) Which one is preferred to describe the characteristics of a group or population, mean or median? and why ?

Median is always preferred over the mean to describe the characteristics of a population because mean takes quantity aggregates it, and says how it looks if it is evenly distributed and also mean always affected by outliers hence it will not describe the exact characteristics.

Q22) Correlation or covariance? which one cleanly describes the relationship between two variables ?

Q23) What is the conditional probability or Dependent event ?

The event which is affected by previous events or the events that are already happened.

If there are ‘n’ people in a group then how many a. total number of handshakes b. unique handshakes are possible

NO both are not same, if there are not sufficient evidence to support the alternate hypothesis it means we fail to reject the null hypo but it doesn’t mean that we accepted the null hypothesis.

Q26) How can you differentiate supervised and unsupervised ML in terms of output ?

Forgiven dataset, if we already know how the correct output will look like then it will be a supervised ML, but in case of unsupervised ML we don’t have any idea how output will come.

RSS stands for Residual Sum of Squares it is the sum of the squares of the variance of the data points.

Q28) How the r2 score describes the strength of the ML model ?

Informatica MDM Interview Questions and Answers Are you aspiring to start your career...