Home Blogs General How To Install NumPy in Python?

How To Install NumPy in Python?

How To Install NumPy in Python?

Python is recognized as a strong and universal programming language due to its ample set of libraries. It is an open-source language and widely used across the globe. NumPy is one such library that is an integral part of Python programming.

As we all know, Python packages make it a unique programming language. Apart from the inbuilt packages, there are too many external packages written and attached to Python. You can install these packages based on your requirements.

Python packages comprise scripts and directories. A module is nothing but a script that acts as a function, method, new python type, new functionality, etc. NumPy is one of the significant packages which is curated for simplifying the process of Python array computation.

Here, we shall discuss in detail about installing the latest version of Python which is Python 3, installing NumPy, Matplotlib, and SciPy on Windows Operating System, NumPy installation on Mac, Fedora, and Ubuntu operating systems. 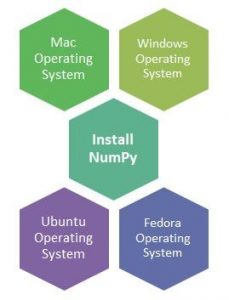 Python packages are always installed using pip which means Package Installer for Python. Pip will be automatically installed when you install Python. Python Package Index will show you the package details based on which you can decide the packages which you want to download depending on your requirements.

For scientific computing in Python, we use numpy library. It provides a multidimensional array of objects. It performs a fast operation on arrays, such as logical calculations, mathematical calculations, reshaping arrays, sorting, basic linear algebra, basic statistical operations, random value simulation and much more.

Why is Numpy fast?

Numpy is fast because it is been mostly written on C language. C language is a low-level language that makes Numpy very fast.

In python, you need not specify a variable datatype because whenever you assign a value to variable python checks the data type of the particular variable. This check of variable data types makes python slower though Python is been written in C language.

How to Install NumPy

NumPy can be installed on various operating systems like Windows, Mac, Ubuntu, Fedora, etc. Here, we will see the two standard OS such as Windows and Mac.

You can also tick other options based on your requirements. The screen will look like the below image: 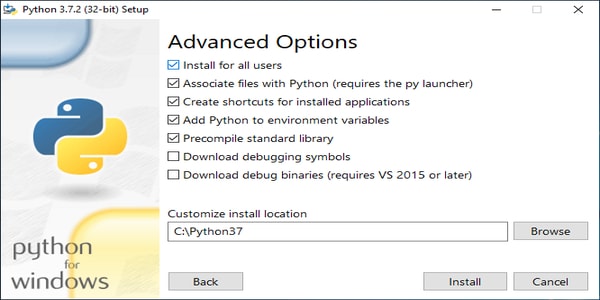 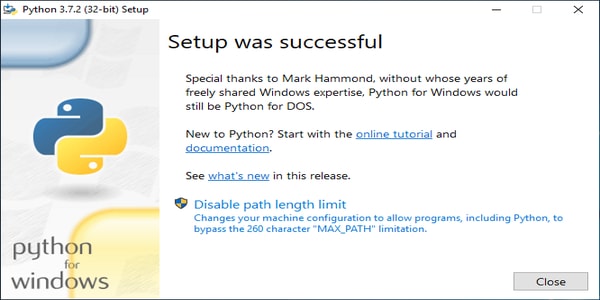 You can verify if Python was successfully installed or not by opening a command prompt. Just press and hold the key Shift and now right-click the mouse anywhere on the desktop. Next, open a command window. Type Python in the command window and click enter. You will see the screen similar to the below image:

You have successfully installed Python. You can exit this screen now. Just type quit() and click enter.

Now let’s see how to install NumPy,  Matplotlib, and SciPy. Open the cmd window and use the following set of commands:

After typing each command from the above, you will see a message ‘Successfully installed’. You can check the version of SciPy which is installed by launching Python through cmd window. Once you do this action the screen will appear like the below image: 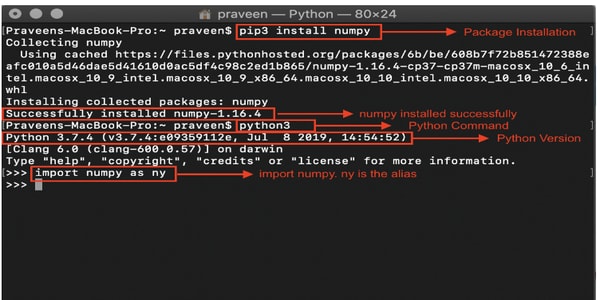 In case of Ubuntu, you will notice that Python is already installed but pip isn’t. If you wish to have a complete package, you must download Python from python.org on Ubuntu with the help of apt install command. Instead, you can also install only pip on Ubuntu by opening a terminal and stalling pip3 and pip with the help of apt install command. The below image shows the apt command:

Now, when you have pip, use the same commands to install NumPy: 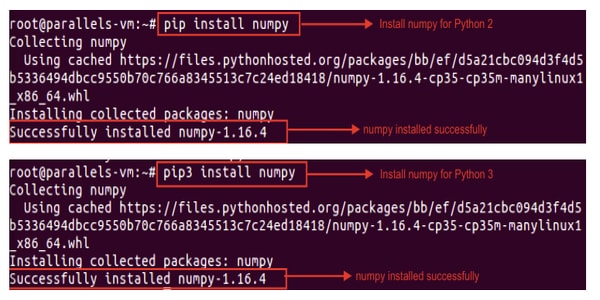 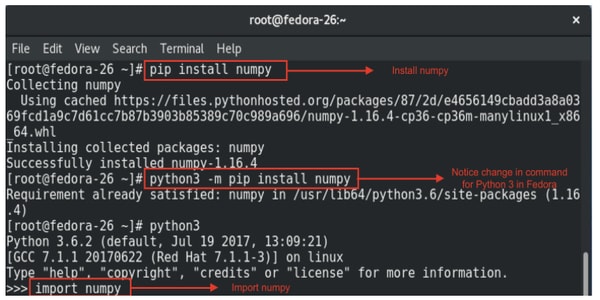 How to import Numpy?

Now that we have installed Numpy, we shall get to know how to work with Numpy. To use Numpy package, one has to first import the package to use the functionalities of Numpy.

We can import the package by just calling its name with import keyword,

You can use submodules of Numpy by calling Numpy followed by dot(.)

Every time you want to use submodules of Numpy, you have to refer to the parent module name( Numpy). So we can assign an alias name to Numpy, after assigning an alias name Numpy can be called with that assigned alias name. The alias name can be assigned as per user’s wish but still, it is good practice to assign alias np which is used by coders to refer Numpy.

Hereafter, you can call Numpy using its alias name np

We have imported Numpy, now let us start coding using Numpy. Initially, we have seen Numpy is fast, let us write a code to check that.

Firstly, I have imported the required packages, time is one of the packages/libraries available in python. To check the time taken by Numpy and the normal list(a data type in python), we are using a time package. The output shown clearly shows that Numpy has taken very little time to complete when compared to the normal list.