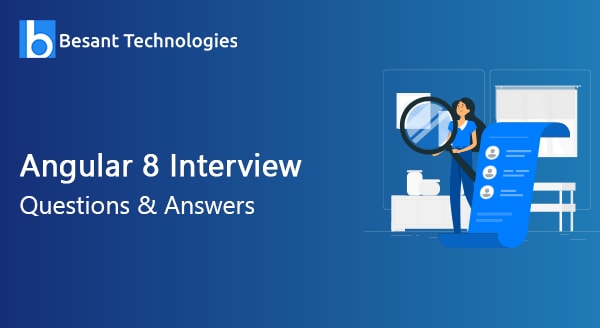 Here is the list of most frequently asked Angular 8 Interview Questions and Answers in technical interviews. These Angular 8 questions and answers are suitable for both freshers and experienced professionals at any level. The Angular 8 questions are for intermediate to somewhat advanced Angular 8 professionals, but even if you are just a beginner or fresher you should be able to understand the Angular 8 answers and explanations here we give. In this post, you will get the most important and top Angular 8 Interview Questions and Answers, which will be very helpful and useful to those who are preparing for jobs.

Angular 8 is the open-source JavaScript framework and mainly used for front-end web applications and it’s completely used for Single Page Applications. Angular 8 training in Chennai by Besant Technologies is the best training Institute and having more than 15+ branches. Besant Technologies has the most experienced trainers and IT professional tutors who are having work experience as the developer, designers, and debuggers. Our trainers have prepared this top and best Angular 8 interview questions and answers. These Angular 8 interview questions and answers are mainly and completely prepared with complete analysis and these questions are very much important and also these are the questions that were asked in the interview in top MNC companies.

Learn Angular from the Basic to Advanced Level with Hands-on Training, Placements, and more with
Angular Training in Bangalore

Ans: Angular 8 is the latest version which is released on May 28, 2019, by the Angular community. It is the most prominent client-side TypeScript based framework that is mainly used to create dynamic web applications. Angular 8 is very much similar to the previous version of Angular but has some more added features. You can even upgrade your Angular CLI to Angular version 8 very easily.

Ans: The key features of Angular 8 are as follows:

Ans: Ivy in Angular version 8 is considered as the Rendering Engine. It was released in Angular 8 as Opt-in. It has opted as the code name for Angular’s next-generation rendering pipeline and compilation. By default, Ivy is intended to be the rendering engine in Angular 9

Q5) What is the main purpose of a Bazel in Angular 8?

Ans: Bazel is one of the key features present in Angular version 8. It always allows you to build CLI applications quickly. Bazel is considered a built tool that is developed and mostly used by Google as it can build applications in any language. The entire Angular framework is built with Bazel. Moreover, Bazel allows you to break an application into different build units which are defined at the NgModule level.

Q6) What is the purpose of Codelyzer in Angular 8?

Q7) What is the purpose of Wildcard Route in Angular 8?

Ans: The main purpose of the Wildcard Router in Angular version 8 is to match every URL as an instruction to get a clear client-generated view. This Wildcard route always comes last as it needs to perform its task at the end only. It is mainly used to define the route of the pages in Angular 8.

Q8) Which command is used to check the current version of Angular CLI?

Ans: The ng -version command is used to check the current version of Angular CLI.

Q9) What are the advantages of Bazel?

Ans: The following are the key advantages of Bazel, and they are as follows:

Q10) What are the limitations of web workers in Angular 8?

Ans: The web workers in Angular version 8 are mainly used to speed up the work of the things in your application during the working of CPU. These web workers mainly allow you to run the CPU computations in a background thread. This, in turn, helps the main thread to free up and then update the user interface.

Q11) What is the main difference between Angular 8 and Angular 7?

Ans: The main difference between Angular 8 and Angular 7 are as follows:

Q12) Which command is used to run and load the Angular App?

Ans: The command ng serve is used to run and load the Angular App.

Q13) What are the key parts of the Angular 8 Architecture?

Ans: The key parts of the Angular 8 Architecture are as follows:

Q14) What is the need for Angular 8 components?

Ans: The components in Angular 8 are the list of classes with decorators that mainly mark their own types and provide metadata to guide Angular to do things. Every application in Angular has at least one component called a root component. This root component is mainly used to connect page hierarchy with page DOM.

Q15) What are NgModules in Angular 8?

Ans: NgModules in Angular version 8 varies from other JavaScript modules. Each and every Angular app has at least one module called AppModule. The NgModule provides a bootstrap mechanism to launch different applications. Commonly, every Angular App contains many functional modules to do things. The key features of Angular 8 modules are as follows:

Q17) Which command is used to install the latest version of Angular CLI?

Ans: The npm install -g @angular/cli@latest is the command which is used to install the latest version of Angular CLI.

Q18) What is the use of nglf directive in Angular 8?

Q19) What is typeofchecks in Angular 8?

Q20) What is the use of the ngSwitch directive in Angular 8?

Ans: It is also a Structural directive present in Angular Version 8. The ngSwitch directive is mainly used to add or remove HTML DOM elements. It is much similar to the switch statement of C#. This directive is applied to a container element with the help of a switch expression.

Ans: Data Binding in Angular version 8 is considered as the key concept, that is mainly used to build the communication between the DOM and the TypeScript code of your component. It is the most prominent technique used to link your data to the view layer. Data Binding also defines interactive applications very quickly and easily. It can be achieved either by one-way binding or two-way binding.

Q22) What is the Purpose of String Interpolation in Angular 8?

Example for String Interpolation is {{data}}

Q23) What is the use of Event Binding in Angular 8?

Ans: Event Binding technique is mainly used to handle the events that are raised from DOM like mouse move, button click, and many more in Angular version 8. When the DOM event occurs, at that moment only the specified method is called in the component.

Q24) What is the main purpose of Angular 8 forms?

Ans: The main use of Angular 8 forms is to handle the user’s input. These forms can also be used in your applications to enable the user to login, enter personal info, update profile, perform various tasks related to data entry, and many more. Basically, there are two approaches to handle the user’s input by using forms. The two approaches are used to collect the user inputs from the view layer and they also provide the way to track different changes.

Q25) Why are the reactive forms used in Angular 8?

Ans: The reactive forms are used in Angular 8 because of the following features. They are:

Q26) Why do we need Template-driven forms in Angular 8?

Ans: In the following cases the template-driven forms are needed in Angular 8.

Q27) What is the syntax to create an app in Angular 8?

Ans: The syntax to create an application in Angular version 8 is

Q28) Which command is used to install Angular CLI?
Q29) What is an Angular Universal?

Q30) What are the advantages of Angular 8?

Ans: The following are the advantages of Angular 8, and they are as follows: