Home Blogs General Why you should learn Python? 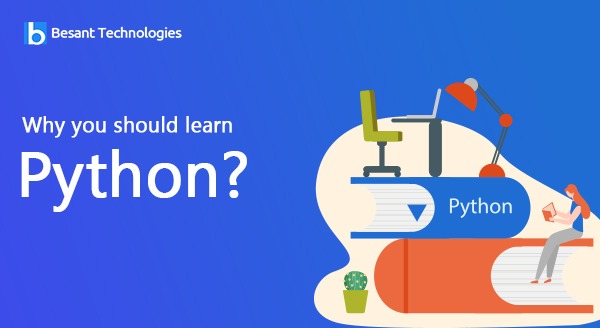 Why you should learn Python?

Why you should learn Python?

1. High Salary and Popularity of Python

Those IT professionals who are expert in Python receives very good salary in the Industry. In the United States, the average salary of a Python programmer is around $116,029 in a year. In the past few years, Python is very popular among IT professionals and aspiring software professionals.

Python is easy to learn and a simple computer programming language. This language is highly powerful and is similar to English language. A large community of IT professionals across the world has adopted Python. Python is an interpreted, high-level, open source and free language of programming.

By using Python, you can do web scraping. In web scraping, you can collect information from different websites. Websites like Pinterest, bit bucket and Instagram are developed by using Flask, Pylons and Django frameworks.

AI or Artificial Intelligence is one of the important reasons which people want to learn Python. It is a significant development in the world of technology. You can build a machine imitate the brain of human which is capable of making decisions, analyze and think.

Also, libraries like TensorFlow and Keras introduce functionality of machine learning in the mix. It offers the learning ability without using programming. Libraries like OpenCV assists in image recognition and computer vision.

The extensible and portable Python features permits you to do operations of cross-language perfectly. Python supports a wide variety of platforms in the Industry from Play station, Solaris, Macintosh, Linux and MS Windows.

The extensibility feature of Python permits you to integrate components of .NET and Java. You can also use libraries of C++ and C.

Python is frequently used in offline, online, large and small projects. It is deployed to create desktop and GUI applications. It deploys library of “Tkinter” to offer easy and quick way to develop applications.

In video games development, Python is widely used. With the help of Python, you can write “Pygame” module logic. This module runs on android devices as well.

Python is an important language of various data scientists. Pythons also handles statistical, matrix, and tabular data. It also visualizes this data with famous libraries like “Seaborn” and “Matplotlib”.

As we all knows that Python is a highly popular language of computer programming. This language is also deployed as a language of scripting. In the scripting, the code is in a form of script and it executes. This code is read and interpreted by the machine.

During the runtime, checking of errors is performed. After code checking, it can be deployed many times. Therefore, by deploying automation, specific tasks in the program are automated by you.

Python is very useful for the validation of products or ideas for big companies. There are various inbuilt frameworks of testing in the Python which covers quick workflows and debugging. Also, there are various modules and tools which makes things very easy like Splinter and Selenium.

Python supports cross-browser and cross-platform testing with frameworks like Robot and PyTest.

Parallel computing is supported by the Python. In the parallel computing, you can deploy Python for Hadoop. Python is frequently deployed for the Big Data. For the processing of big data, it has libraries like “Pyspark”, “Dask” and “Pydoop”.