Home Blogs General What is Python? 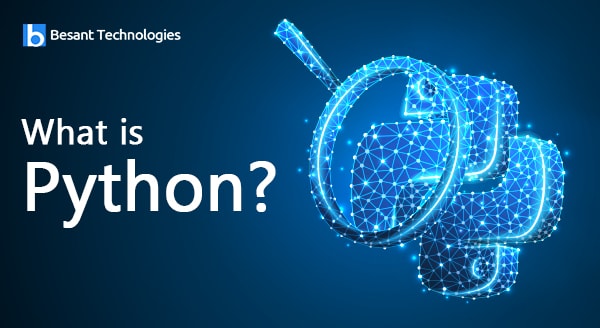 Python is a general-purpose programming language that can be used in different methodologies. It can be used to develop any modes of applications which include any complex functions. In our day to day life, we move through the search engine giant, Google, which is developed using Python. Also, it is a common programming paradigm for many more business enterprises. Being a high-level language, Python allows the programmers to write in simple understandable language to create simple to complex programs.

During the late 1980s, Guido van Rossum initiated to create this integrated language. Later it was developed by Python Software Foundation and now also it is led by the. A python programmer can use the object-oriented concept, reflexive, imperative or functional depending on his wish since the language is multi-paradigm.

The syntax of Python is so simple so that the increase in readability reduces the cost of maintenance. It supports modularity and packages which allow code reuse. Its extensive library is free of cost for many platforms. As there is no compilation step here, the edit – test – debug steps are very faster.

Python is one of the most popular programming languages and plays a lead role in this modern digital era. It was created by Guido van Rossum in the year 1991.

It is used in diverse fields such as:

Python can support various platforms such as

What is Python and what is it used for?

Python is an interpreted and high-level language of computer programming. In 1989, Guido Van Rossum created this language. In 1991, it was released first. Python programming language is a general purpose and a good language for the development of frameworks, web applications and desktop software.

Those persons who are expert in C++ or Java found Python computer language very simple to use and easier to code. Python is a dynamic language of computer programming. It is simple to learn and offers strong typing. The style of code of Python is highly natural. It is simple to understand and read. This is due to absence of braces and semicolons. The computer programming language “Python” works on various platforms like Solaris, Macintosh, Linux and Microsoft Windows.

Why Python is so popular?

Due to its simplicity, Python is a popular language of computer programming. Given below the highlights of the Python.

Why do developers love python?

These are the few glimpses of python and its popularity in software development. Let’s deep dive into the Python language now and let’s start exploring it.

If python is not installed in your computer, you can download the python version of your choice from the following link https://www.python.org/

In Linux OS, python can also be installed from the terminal command using the following command

For Debian based OS, use apt:

On Red Hat and derivatives, use yum :

Once you have installed python, check if it is successfully installed by running the already mentioned version command.

Did you like it. Yeahhh!!! It’s as simple as that!!! And now let’s move forward with a small sample piece of code. And I’m sure that you will keep enjoying the coding in python.

Comparing Python with other programming languages

Python is faster than many programming languages because it won’t compile the code before execution and the same time it will be compiled in the background since it is an interpreted language. Python focuses on abstractions and hence the coding will be easy so that anyone can understand it easily.

Both are interpreted and high-level languages which resembles in many programming aspects. The major differences that can be noted in these languages are flexibility and readability. Ruby by its nature, it is difficult to read. One who is studying it may ask how it is being like.  While Python is following a standard code which is easily understandable. This makes the programmer comfier since he can use what he likes and when other programmer goes through the project, he can easily understand what it is.

Python is a simple and readable language, it can be used in a team where many programmers are evolved. But Perl is not as readable as Python. If someone writes some code and if another person goes through it, it will take great effort to understand. Python is so faster than in terms of programming and execution. As the same operation can be done in minimum codes, python decreases the execution time which gives the product faster. Python has got a very extensive library and repository pre-written code as in MVC.NET.

Both are object-oriented programming languages that have prewritten codes in a repository but has a great difference in the implementation. Java is both interpreted and compiled language and hence while compiling, it compiled to bytecode. During running, this bytecode enters to java runtime environment that in turn machine which is readable by the machine. Java codes cannot be modified when it is converted to bytecode.

In Python, the compilation takes place during the running phase. At that time code is converted to machine-readable format. No other intermediate stage is occurring here.

The syntax of PHP is too hard to understand. If a programmer writes PHP code by using his ideologies, then another person who read the same won’t understand it easily. PHP is more web-oriented programming language rather than system level. We can create a web server in Python that can read PHP. But we cannot make a web server using PHP which can read Python. A python is an object-oriented programming language, but PHP is not.

As in other programming languages, the function definition will obey the syntax. Here the keyword def will be the starting followed by function name and parentheses. The arguments can be placed in between along with the definition. The code block should start with a colon (:).

Defining a function will give the name and the parameters. After defining it, we can call it from another function or by using the Python prompt. We can call using these formal arguments:

Anonymous functions are those which are not declared in the standard manner by using def Keyword.

Why is Python language important?

What is Python best for?