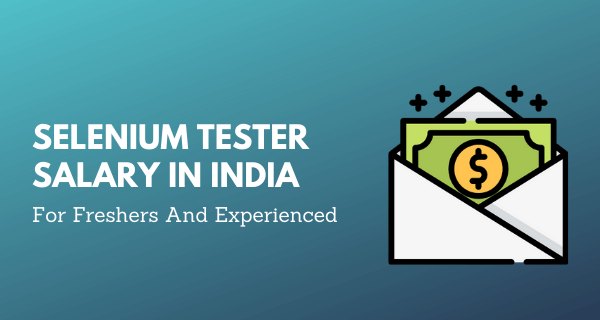 Selenium Tester Salaries In India For Freshers And Experienced

Put simply, selenium is a web-based tool used for software testing. And of note is the fact that it’s leading in the software testing tool market for quite some time now. With unprecedented growth in the software industry, simultaneous growth in the need for testing software programs is only obvious. And this explains why the demand for selenium experts might not dip in the times to come. If you want to build your career in the field of IT, then selenium testing can be an area worth focusing your attention on. With a selenium job, you won’t just receive fulfilling work experience, but will also make an impressive earning. After all, the Selenium tester salaries in India for freshers and experienced are considerably high at almost all ranks.

Why enroll for a selenium certification right away?

Selenium is a licensed open-source tool that is way ahead of its competitors. It’s a framework with which automation of applications is done in a highly efficient manner. What makes it so popular is undoubtedly its impeccable features, which we discuss here one by one. Read on-

Selenium’s growing impact in the area of software testing

Software testing is a dynamic area. That is why it’s no surprise that it keeps on facing challenges every now and then. Even testers encounter roadblocks. Since manual testing is a cumbersome process, and testers have to tackle multiple challenges while manually testing applications, automation feels like a gush of fresh air. Test automation has invariably proved to be a boon for all testers.

An important point that you need to note here is that DevOps, open-source innovation and agile development have heavily contributed towards an unhindered evolution of the testing environment. Interestingly, when it comes to continual development and delivery, selenium has built an image of itself as a reliable automation tool. With benefits like speed, cost-effectiveness, and compatibility, it has successfully made its mark in a domain that is ever so competitive.

Why selenium is a thing of the future?

Selenium, undoubtedly, is a promising automation testing tool for the times to come. Here, you find all the reasons that make us say so. Find out-

Speaking of the best automation testing tools in the market, selenium automation testing is aggressively leading the pack. Since it’s free to download and use, anybody interested can choose to learn it in order to prepare for high-paying jobs in leading organizations. The scope in the field of selenium testing is indeed wider and the future is bright. Hence, it can help you build a successful IT career. In case, you want to learn about selenium web driver scripts and its frameworks, then there are specialized selenium courses that you can enroll yourself with. The bottom line? Qualified test automation engineers shine bright in their careers.

Skills that can help you shape an enviable testing career-

If you have decided to take up testing as a career, then learning the following technical skills will not just add feathers to your cap but will also help you get the best Automation tester salary in India. Read on-

Although it is important that you have command of the above-mentioned skills, it is not absolutely necessary to be a master in all of them. But bear in mind that this is the suite  of skills that you might need to do impressively well in your career as a tester.

Now, that we have discussed all the critical aspects of a career in selenium testing, let’s get to the money part. But before digging deeper, we will have to know what responsibilities Test Automation Engineers or Senior Quality Assurance (QA) Engineers need to shoulder. Let’s find out.

What Do Senior Quality Assurance (QA) / Test Automation Engineers Do?

Test automation engineers generally work in teams. The first work in association with the test leads so that challenges linked to the test automation process can be identified. They then join hands with the test designer so as to have a hang of all specific requirements of the test. They also need to be on the same page with the developer who creates the application that is undergoing testing.

Basically, these engineers have to work hand in hand with a lot of people engaged in the testing process, so that there are no glitches, and outcomes are favorable.

Note that competent test automation engineers know the right time to put automated solutions into use, and they know their correct order.

Next is the acceptance test. This follows more or less the same process as the other two phases. Whenever changes are required, the test designer is notified so that they can review the required improvements and make changes.

From the discussion above, we have developed a sufficient understanding of selenium testing as a job profile, and its working as a process. Hence, now we will check out the Selenium tester salaries in India for freshers and experienced so that it gets easy deciding whether or not this job is worth your effort.

It’s worth noting here that Selenium tester salaries in India vary widely based on different working conditions. For instance, a person working in Kolkata might not receive the same compensation as someone who is employed in Mumbai. So here, we will try to find out what factors influence selenium automation testing salary and how much the salary figures change on the basis of such factors

When it comes to compensation, Synechron Technologies definitely leads the pack by offering an average of INR 1 m per year to its employees. Sapient Corporation follows Synechron Technologies close behind and it’s average yearly compensation to its employees is pegged at 970k. Capgemini can also be counted among the top paying companies with its yearly offering of 925k. The next in the list is Cognizant Technology Solutions Corp which offers a decent payout of INR 767k per year to Senior Quality Assurance (QA) / Test Automation Engineers. Tata Consultancy Services Limited pays its employees somewhere around INR 761k annually. Accenture stands next to Tata with its annual offering of 750 k. Infosys Limited and Wipro Technologies Ltd. lag behind as they offer INR 731k and 573 k respectively to their test automation engineers.

If you boast of amazing Test Automation skills, then you can expect to draw somewhere around  INR 916,176 a year, on average. With Automation Scripting skills, employers would readily offer you about INR 897,910 annually. While Java skills can help you bring home a yearly average compensation of INR 876,974; thorough knowledge in Quality Assurance / Quality Control can make you eligible for a mean yearly compensation of around INR 846,861. Strengthen your grip on GUI Test Automation, and you will be able to draw close to INR 895,295 a year.

Experience is also a critical factor that impacts salaries in this field. A Senior Quality Assurance (QA) / Test Automation Engineer in the early stages of his career, with an experience of 1 to 4 years, can expect to draw an average yearly salary of INR 662, 335. And this includes bonuses, tips, and overtime payments. Senior automation tester salary with mid-level experience i.e. an experience of around 5 to 9 years, is eligible for a compensation of INR 973,246 a year, on average. The mean salary of a senior automation tester, having an experience of about 10 to 19 years, is close to INR 1,540,558, which is indeed impressive.

The mean salary of a Senior Quality Assurance (QA) / Test Automation Engineer in India, having skills of Selenium Automated Test Tool is INR 889,304. So, this can be regarded as the national average. So far, we have discussed average Selenium tester salaries in India for freshers and experienced based on factors such as experience, skills, and employers. Now, we will see how salaries surpass or lag behind the natural average, based on employment location.

The discussion above points at the fact that selenium can be a valuable addition to your resume if you want to offer upward thrust to your IT career. Selenium tester salaries in India for freshers and experienced are indeed impressive despite being dependent on so many factors. Hence, enroll yourself with a selenium certification course right away and boost your value in the IT job market.

In an era of financial difficulty, Infosys Pvt. Limited is providing decent salaries...

Wipro Salary Package For Fresher in India 2022 Wipro Technologies is a multinational...