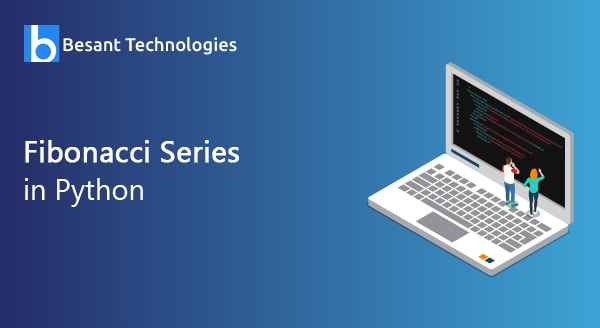 Python is a general-purpose programming language with the process of interpreted, high-level programming language. It also supports OOPS concepts. It mainly used to generate standard software applications. Understanding the concepts of python is helps us to create different types of Applications using python. For that, we use some fundamental programs to do it. That we also called implement the logic process in programs like finding prime no, even or odd no’s and etc..

What is the Fibonacci Series?

Now see the examples to implement this Fibonacci series in python.

In python, we implement this Fibonacci series in two simplest ways as following

In this example, we implement the Fibonacci series. First, we will take the input as n for a number of the sequence we need and then we declare first and second values as 0 and 1 respectively because of these values the default of starts the Fibonacci series. Then we implement the logic with if the condition of n<=0. If the n is 0 means it takes the first itself as a result. The else we use for with range to process the sequence. Set the stop value of the range as n. then implement the swapping concept to interchange the values. i.e first and second will be changed after every iteration. Then the addition of first and second will stored in next.

In this example, we implement the Fibonacci series using a recursive function called Fib_Recur. Just pass the no.of terms as an input and returns the result of the current value with additional previous values as a recursive process. Here also take input and check the <=0. i.e positive value and call the recursive using for loop with range function. But here use only stop value in range.