Home Blogs General How to implement Power function in Python ? 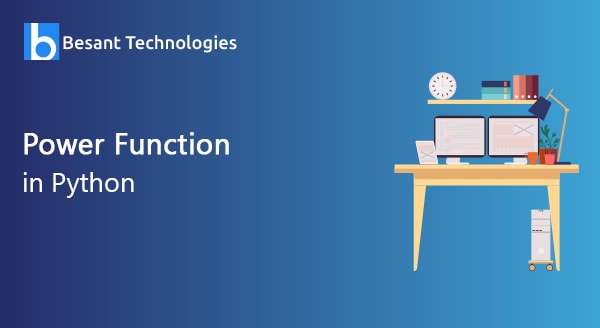 How to implement Power function in Python ?

With the advent of computer languages and cutting technology, Python is certainly one of the most powerful and efficient languages that are meant for making coding easier and results better. It is known for having a multitude of unique features and functions that certainly distinguishes it from the rest.

It is used for developing complex applications that also to solve complex problem statements. It has been designed in such a way that it is capable enough to handle all computations and calculations. The power function is commonly well known in the field of Mathematics whereby one can derive the power of a number to certain other numbers.

While programming with Python, when one needs to obtain the power of a variable m to the variable n, Python provides the power function in order to make the process easy, simple and hassle-free. Also, if in a very rare scenario where one also includes a third new variable called x inside the computation, the power function then gives m, raised to the power of n, modulus x.

The syntax for the power function in Python language is as follows:

The parameters involved in pow() function:

Now that you have become aware of the basic syntax and mathematical logic of the power function, let us now see on what the parameters involved in the syntax present above indicates.

Case 1: The first parameter m can be positive, negative integer value but not zero.

Case 2: The second parameter n can again be positive, negative integer value and can also be zero.

Case 3: The third parameter z is mostly not included by many people as it is optional.

Now that you are familiar with the basic scenarios of how computations are done with power function let us now look at some advanced scenarios.

Consider the following program sample encoded in Python to calculate the power of a base number by using the concept to recursion to arrive at the answer.

The values for base and exponent are entered as inputs m and n. The numbers which are entered enter the recursion method in order to obtain the power of number ‘m’. Basically the common logic is that if any number is raised to the power of one, then automatically the value of the base number is returned as the end result.

In case, the value of power number is a positive, non zero number which is not equal to one or zero, then the method gets called recursively until the final result gets derived.

Why using pow() is more useful?

Thus as we can see, using the power function in Python can evidently be very beneficial in obtaining the results at a single stroke. If it were not for this function, then the developers have to manually code the logic to perform the power function every time it is being used which will involve repetitive efforts and a waste of time.

Also, when looking at it from a quality perspective, writing repeated lines of code is not the most ideal and efficient way of coding. Thus learning to use the functions, methods, and intricacies of the language is expected out of an ideal coder or developer.