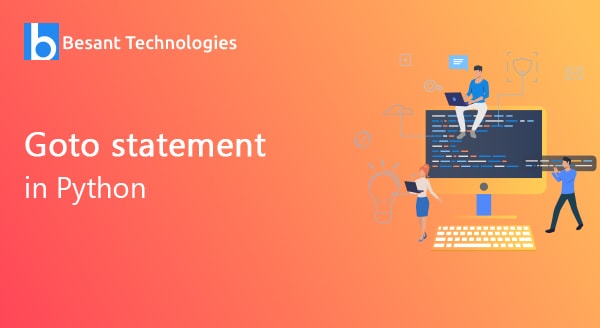 The goto statement was first activated as a joke on April 1, 2004. Programmers around the world took the goto statement for their programming use, and it’s now one of the essential functions used by every programmer across the globe.

Python is considered to be the most preferred programming language that is technically capable of creating the best operating system in the industry. Everyone starting from the beginners to experts is making use of the Python, but still, few factors are kept unnoticed in Python. One among them is the native goto statement. In this tutorial, let’s check out the native goto statement in Python in a subtle way.

A goto statement is termed as the piece of code or syntax that offers an unconditional jump from the goto statement to a labeled statement that is marked as the end in the same function. If I need to explain this in layman terms, let’s say, you need a program to skip some specific number of functions, in this case, a goto statement can be used between the program.

Let’s check for the syntax of the Goto function in Python.

Considering the above syntax, you can replace the label with any text. Let’s admit it as “flow”. So now the syntax will look like

comefrom is another statement that works identical to the goto function. Both goto and comefrom statements provide flexibility and scalability to the entire Python programs, and this enables one program to control the mechanism of program flow. It also holds the accessibility to control the idioms flow.

Once you have imported both goto and comefrom statements, you can make use of these both statements anywhere on your programs conveniently. The main reason for using the goto statement in Python indicates that you are providing instructions to the interpreter to execute the next code line instead of running the present one. ‘Label’ is the section that should be marked by the target line of code, which is the code that the interpreter has executed. The label tags are developed to be random, and they are the arbitrary identifiers in Python that is prefixed by a dot.

What do you mean by Computed goto statement in Python?

Comefrom is one of another critical factor that it’s used as a debugging aid when it comes to programming. They are neglected to be used in the standalone programming operations because it has a high chance of leading to supporting and inconvenient results.

What are the restrictions present in the Goto statement in Python?

Let’s check out this with an example.

The above example is breaking out from a loop that is deeply nested. Now let’s check out a case that clean up after the fail of something.

# Imagine that these are real worker functions.

The goto statement in Python is considered to be a helpful one for both auditing and debugging purposes. Even though they are used in day to day programming, using the goto statement often can provide you with amazing results.

I hope the above tutorial made you understand about the goto statement in Python clearly. Any doubts regarding the goto or comefrom statement? Let us know through the comment section below.