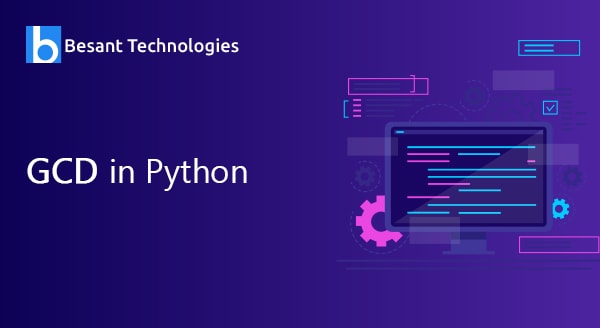 The GCD concept finds application in a large range of different scenarios and specifically in the area of encryption and decoding. Sometimes it is also used for the very smallest of purposes like simplification of the numerator and denominator portions which are present infractions.

For anyone who knows the basics of mathematics, knowledge about GCD is common. Python language is known for encompassing various mathematical concepts and calculations by the means of predefined written code which are encapsulated as methods or functions, which can be fetched by importing the specific packages. Calculating the value of Greatest Common Divisor can be performed using the function Math.gcd() available under Math Module in Python programming language to make computations faster, accurate and precise.

Method 1: By the means of using Recursion

In this method of deriving the Greatest common divisor, we use the concept of recursion for deriving the desired results.

Method 2: By the means of using loop structures

In this method, we deploy iterations and loop concepts to derive the Greatest common divisor of two numbers.

Method 3: By the means of the Euclidean Algorithm

The Euclidean Algorithm is solely focused on the base concept that the GCD of two non zero, positive integer numbers will be capable of dividing the difference between the two numbers as well.

Now that you have seen different methods of writing code for deriving the GCD of two numbers in Python, finally, we introduce you to the simplest Math function that can calculate the GCD in a single line of code.

But for this, you have to import the Math package in order to be able to use all the methods and functions that are available under the specific package. The method called gcd() can be used in order to derive and compute the GCD value of any two integers and return an integer value that gives the final output result. You can see the following program sample to have a clearer picture.

Let us see the working of math.gcd() function.

Syntax to be followed :

The math.gcd() method returns the highest value of the common divisor for the two input numbers.