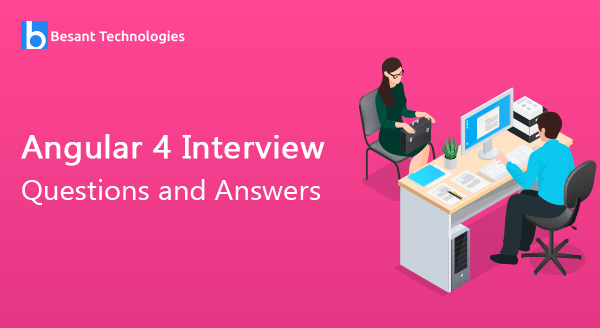 Besant Technologies supports the students by providing AngularJS interview questions and answers for the job placements and job purposes. Angular 4 is the leading important course in the present situation because more job openings and the high salary pay for this Angular 4 and more related jobs.

In this post, you will get the most important and top Angular 4 Interview Questions and Answers, which will be very helpful and useful to those who are preparing for jobs.

Angular 4 is the open-source JavaScript framework and mainly used for front-end web applications and it’s completely used for Single Page Applications. Angular 4 training in Chennai by Besant Technologies is the best training Institute and having more than 15+ branches. Besant Technologies has the most experienced trainers and IT professional tutors who are having work experience as the developer, designers, and debuggers. Our trainers have prepared this top and best Angular 4 interview questions and answers.

These Angular 4 interview questions and answers are mainly and completely prepared with complete analysis and these questions are very much important and also these are the questions that were asked in the interview in top MNC companies.

Q1) What are the lead components of Angular?

Answer: Angular contains the below components –

Q2) What is CLI and how to use for angular?

Angular CLI is acronym for Command Line Interface and used to build angular apps using in the form of nodejs style modules like you need to install using npm command.

Q3) Difference between constructor and ngOnInit?

Constructor works as default method in TypeScript classes which is used for the initialization.

ngOnInit method is specific to Angular, It is used to define bindingls in Angular.

//called intially before the ngOnInit()

//This called after the constructor and after the first ngOnChanges()

Dependency injection (DI), is a design pattern which makes code to write loosely coupled. Angular has its own DI framework for resolving dependencies.

So application will have service which will work based on other service through using DI which makes code loosely coupled which help to reduce dependencies.

Q5) What is ngFor directive?

ngFor directive in Angular used to display each item of the list in the template. Below is the snippet for the same.

RxJS is a library and used to composing asynchronous and callback-based code in a functional,HttpClient consume and produce RxJS Observables.

Below is the snippet for the same.

Q8) What is Angular Router and use of this?

Angular router use to navigate from one to another or next view based on application perform tasks. This model works as brower’s application navigation.

Q9) What is the use of base href tag?

This tag required to routing application which should add element in index.html as the first child to indicate to compose other url of application. Below is the snippet to set the href value as below

Q10) What are the router imports?

Angular Router represents a particular component view for a given URL which is not part of Angular Core. This is available in @angular/router library to import required router components. Below is the snippet for the same.

On each navigation, Router emits navigate through the router. Below events is to track the life cycle of the route.

Q12) What is Angular Universal?

This is server-side rendering module which recently integrated with Angular CLI. This is available under @angular/platform-server package.

Q13) What are types of compilation in Angular?

Angular has two types to compile your application,

AOT – Ahead-of-Time (AOT) is one of the type of compilation that compiles angular app while building time.

Below is the ng build or ng serve command

Q15) What is the syntax of decorator in Angular?

Below is the basic syntax of decorator –

Q16) What is the purpose of common module?

Q17) What is State function?

This function used to define different different states to call on each transition. It takes two arguments unique name and style().

Below is the example for the same.

Q18) Which are the class decorators in Angular?

Q19) What are the class field decorators?

This statements declared immediately before all the field which has define in the class. Below is the example for the same.

Q20) What is One-way binding in AngularJS?

One way binding is used for one-time expression and represents as double colon – “::”.

Q21) What is the (ngModel) used for in AngularJS?

This used for Two-way data binding

Q22) What is a digest cycle in Angular?

Digest cycle is the code that runs at an interval which can be set or simply works fast as default.

Q23) What Is @ngmodule in angular?

It’s a Angular 2 module. It’s a decorator function which allows users to mark something like module/component and it enables additional data.

It comes under Angular 2 which allows to pass data into controller and template through html and custom properties. This allows to reuse components and display the same for each instance on the rendering.

Q26) When ngOnInit used to call in Angular?

In Angular, After display first bound properties nogOnInit will get called.

Whenever any component gets destroyed/unmounted , async pipe works automatically to avoid memory leaks.

Q28) What is lean component mean in Angular?

The lean component used only to display the data.

Q29) Why do we required route guards in Angular?

This is one of the interface which tell the router to allow or not the navigation on requested route.

Q30) What is the use of RouterOutlet?

RouterOutlet required to bind the components whenever the navigation get called.

Q31) What are the building blocks of Angular application?

Angular application is made by using the below.

Q32) What is mean of reliability injection in angular?

Whenever there is dependencies on the component like one component depends on another, this particular function is turned on and off when the functionality is turned on.

Q34) what is binding and describe the types?

This is a process to get the data combine which always used to work for each flow. We have two types for this-

Q35) What are the different ng commands in angular?
Q36) What are the data types define in TypeScript?
Q37) What is required to validate the form inputs?

Form inputs used to validate with cNg-Validate and such inputs like barcodes, mobile numbers, email.

Q38) What are the ways to create custom directive in angular?
Q39) Describe about the Directive and Directive Types?

Q40) What is data Binding in angular and how it works?

Data binding used to communicate between template and component and it worked whenever change event will occur. It has two types, below are the types.

Q41) What is Singleton pattern and how it works in AngularJS?

This design pattern restrict to create a object again and will pass the same object which is available. In AngularJs dependency injection used to enable this pattern , once this is enabled then class create object.

Q42) What are the event listener directives that attach to HTML element?

Q43) What are the various styling form in Angular which has to adds in CSS classes by ngModel?

ngModel adds below CSS classes to allow styling and control.

Q44) What are the built-in validators in AngularJS list out few of them?

Below is the few validators which are built-in .

Q45) What are the Structural and Attribute directives Structural in Angular JS?

To Add or Remove Items from DOM below are the one

Below are the attributes which appears changes on element

Q47) How to use *ngFor Loop directive?

Q48) What type of data work with an async pipe , list out few?
Q49) Difference between scan() vs reduce() in AngularJS?

Scan – This applied with function for each item emitted which is perform by Observable, sequentially, and emit on each success value.

Reduce – This works same as Scan except it emit only final value.

Q50) How the TypeScript code is converted into JavaScript code, brief the process?

This is known as Transpiling. TypeScript code used to write in Angular application but internally it gets transpiled into equivalent JavaScript.