Home Blogs General What is Blockchain? 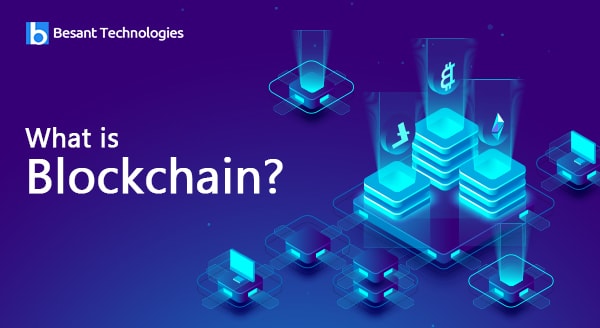 Discussing about blockchain definitely need some brief history that gave way for the creation of the same. The oldest form of blockchain is the Hash tree or Merkle tree. This data structure was intended to make sure that the data transferred between the computers are not manipulated. It also ensures that there is no flow of false data. The peer to peer computers sometimes come up with certain data issues, which was solved by using the Hash tree.

Later in the year of 1991, a secured chain of blocks was created using the hash tree which is actually a data store where each one is connected with other. When we add a new block to it, it will contain all the information regarding the entire chain.

Blockchain will keep the records of all exchanges where each record is called as ledgers. Every transaction is added to the ledger as blocks. We have got cryptographic keys to get a unique identity. One key is the private key and another is named as a public key. It altogether forms the digital signature. Our public key will be available for everyone but the private key is used to unlock the inner transactions that are very confidential in nature.

When a transaction occurs, it will consist of a digital signature, a time stamp, a public key, and a unique ID.

Blockchain technology can be compared to the internet where lots of blocks of information are stored. So blockchain cannot be controlled by a single point and there has no single point of failure. It is transparent and incorruptible since it checks the overall chain in every ten minutes. The data is stored as public in the entire network, but it cannot be altered since it requires high computing power.

The enhanced security of Blockchain

Here the data is stored centrally and the blockchain eliminates the risk of storing data like that. This issue is addressed here by means of keys that we already discussed in the above session.

Here nodes are referred to as computers that have digital ledgers. During each transaction, the nodes will check the validity.

Block can be defined as a spreadsheet.  All blocks are collectively called a blockchain. Every node will keep the records of the blockchain. Once the block is filled with a certain number of transactions, the new node is formed.

A blockchain will contain all the information regarding the transaction. During each transaction, a hash will be created. A hash can either be a string of numbers or letters. Each transaction is entered in the order. We are not supposed to alter the order. The value of the hash depends on the current transaction and the previous transaction. A small change in the value of the transaction will affect the hash. It is by examining the hash that the node finds that whether any alteration has occurred. Variation in the transaction will create an entirely different hash every time. If the transaction has got the approval from the majority of nodes, then it is added to the block. Each block depends on the previous block which finally creates the blockchain. This blockchain is spread over different computers which are called as nodes. Each has got a copy of blockchain. It updates every ten minutes.

In order to perform the transaction, we need a wallet and a private key. The wallet is basically an address that contains strings of numbers and letters. When we want to send something to someone, we should sign it using the private key. This key system is the soul of cryptography which is used here. When the message is sent to the broadcasting network, the nodes will work on the message to make sure that the transaction is valid. After the confirmation of the transaction, it is placed in the block which cannot be changed further.