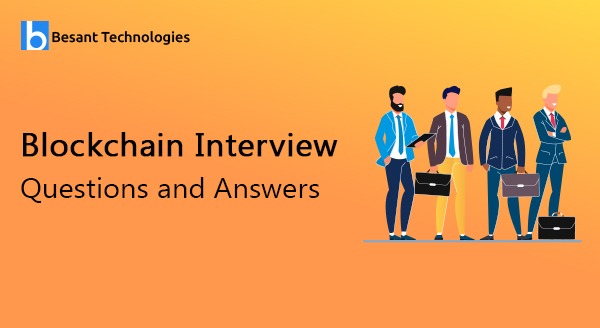 BlockChain interview questions and answers for the job placements

Here is the list of most frequently asked BlockChain Interview Questions and Answers in technical interviews. These questions and answers are suitable for both freshers and experienced professionals at any level. The questions are for intermediate to somewhat advanced BlockChain professionals, but even if you are just a beginner or fresher you should be able to understand the answers and explanations here we give.

Ans: Merkle Tree is used to verify the transaction in the quickest time and less space complexity.

When a transaction occurs in a BlockChain the first step is to hash each transaction in the memory pool using SHA256.These hashes are then placed into a Merkle Tree (hash tree).The hashes of transactions are grouped into two and then concatenated result is hashed again until the tree is formed.

Hash at the top of the tree is called the Merkle root.The Merkle Root of this hash tree is placed into the block’s header along with the hash of the previous block and a random number called a nonce.The block’s header is then hashed with SHA256 producing an output that will serve as the block’s identifier.

Ans: ECDSA is a cryptographic algorithm used by Bitcoin to ensure that the legitimacy of the transaction.It works on the principle of ECCDLP (elliptic curve cryptography discrete logarithmic problem) which means it is easy to go from A–>B but almost impossible to go from B–>A i.e ECC is a trapdoor function.

Q4) Why ECC is better than RSA?

Ans: ECC and RSA both algorithms work on the principle of asymmetric encryption.In asymmetric encryption, there is a public key for encryption and private key for decryption. ECC is better than RSA because it provides equivalent security for a much lesser key size which makes ECC faster and more secure.As for equal key size, ECC would be more secure than RSA.

Ans: A ledger is typically a database.The blockchain is a shared public ledger on which the entire Bitcoin network relies. All confirmed transactions are included in the blockchain. This way, Bitcoin wallets can calculate their spendable balance and new transactions can be verified to be spending bitcoins that are actually owned by the spender.

Ledgers can be centralized or decentralized depending on public or private BlockChain.

Q6) What is the difference between Blockchain and distributed ledger?

Ans: A distributed ledger is a database that is spread across several nodes or computing devices which are in layman terms the miners who run the algorithm on their computing devices. Every node copy and saves an identical copy of the ledger. Each participating node of the network updates itself independently.

The most striking feature of distributed ledger technology is that the ledger is not maintained by any central authority. Updates to the ledger are independent and done by each node. The nodes then vote on the update(transaction) to ensure that the majority agrees with the conclusion. This voting and agreement on one copy of the ledger is called consensus and is executed by a consensus algorithm.

A BlockChain is distributed and is managed by peer-to-peer networks. Since it is a distributed ledger, it can exist without a centralized authority or server managing it, and its data quality can be maintained by database replication and computational trust.

The structure of the BlockChain makes it distinct from other kinds of distributed ledgers. Data on a BlockChain is grouped together and organized in blocks. The blocks are then linked to one another and secured using  ECC cryptography.

Q7) What is Quorum Slice?

Ans: A quorum is the number of nodes required to reach agreement within a system. FBAs instead use ‘quorum slices’. A quorum slice is a subset of a quorum, which can convince another specific node to agree.

Q8) What is a segment tree?

Ans: Segment Tree is a basically a binary tree used for storing the intervals or segments. The underlying principle behind this data structure is to store certain values of ranges as a balanced binary tree and hence query and update can be performed efficiently.

Ans: Diffie-Hellman is an algorithm used to exchange a secret key between two parties. It is used in symmetric encryption algorithms like AES.

Q10) How are boxes linked in a BlockChain?

Ans: Boxes are linked backward to the previous block in BlockChain.Genesis block is the first block of the BlockChain.A block can never have more than one parent block.

for i in example:

Q13) Which of these facts about a ledger is NOT CORRECT?

A. A ledger is used purely for the reporting of cash

B. A ledger consists of transactions, often governed by contracts

C. A ledger is a system of record

D. A ledger describes the inputs and outputs of a business.

A) Efficient, dynamic, cognitive, and reliable

B) Consensus, provenance, immutability, and finality

A) A technology that underpins Hyperledger Fabric

B) Another name for BlockChain

Q16) What is the core requirement(s) for a business BlockChain?

Q17) The primary benefit of immutability is …

A) Business rules implied by the contract embedded in Block Chain

B) A cognitive contract

C) A legal contract is written in constrained English

D) None of these

Q19) In a business BlockChain, transactions …

A) Cannot be modified

B) Are added to the ledger with appropriate confidentiality

C) Are endorsed by a subset of business network participants

Q20) What is the appropriate use of business BlockChain?

A) Modern, cognitive, and transformational fabric for the 21st century and beyond

B) A more efficient transaction processing system across a business network

D) None of these

Q21) What makes a good Block Chain use case?

A) An identifiable business network

B) A business problem to be solved

C) The need for trust

Q22) What factors can help ensure a successful FIRST BlockChain use case project?

A) A limited scope

B) A smaller business network

C) A scalable project that can grow participants and scenarios

Q23) – What do you understand by ‘burning of tokens’

Ans: In its simplest form, burning a token means making the token permanently unspendable. There are a few ways of doing this, such as sending the tokens to a bogus address (an address with no known private key) so that the token is no longer usable.

Q24) Can you explain me the difference between ‘contract address’ and ‘owner address’?

Ans: A contract address can never be accessed directly (no private key). If I write a contract, I can add a function that if the contract receives ethers that came not through a function (for example a deposit()-function) but were directly paid, that those ethers get returned to the payer. But if I do not add such a repay-/revert- function, the ethers would be lost in the wallet forever. They then can not even be accessed by the contract owner.

Q25) What are the best practices while writing the smart contracts?

Ans: a) Never do the inconsistent naming Use the latest version of the solidity compiler. Consider using Solidity’s require the function to express preconditions concisely. Try to keep the gas cost low as possible. Do the unit testing of the smart contracts using the Mocha Framework.  Try to use the ‘self-destruct ‘ function at the end of the smart contract.

Ans: ERC20 token is a set of standards that are defined in the Ethereum, they consist of 5 functions and 2 events that help the transfer of tokens and listening to events.Most of the ICOS are using the ERC20 token as a standard token.There have been several improvements in the ethereum network also known as EIPs which have increased the functions of tokens.

Q27) How my ethereum wallet works?

Ans: MyEtherWallet runs an Ethereum node, and enables RPC on that node. This allows the client-side web3 library to connect to their node, and request information such as balance, or submitting signed transactions.Further wise they make use of a library called ethereumjs-wallet, which allows you to convert a private key to an address (which is then used to request balances), and a library called ethereumjs-tx which can sign raw transactions with private keys.

Q28) How write a whole document in ethereum BlockChain?

Ans: Using IPFS is almost definitely the right approach, as writing data to the BlockChain is usually prohibitively expensive. Having stored the data in IPFS and got the hash back, you can read the data using ipfs.cat(document_hash).If you want to put a document in storage, you can convert it to bytes then store the bytes on the BlockChain, but you don’t want to do this. Putting documents in the event logs may be somewhat less impossible but don’t.

Q29) Can I transfer ether from a wallet to smart contract directly without invoking a payable function?

Ans: If you want to send ethers to smart contract you should define a payable function it could be the fallback function.otherwise, you will get an error.

Q31) Which IDE should we use for the development of the smart contracts?

Ans: Generally we use the REMIX IDE which is present online, or we can use the Truffle for the development and testing of smart contracts.

A – BlockChain is a distributed ledger, which has a shared database based on consensus algorithm.

Q33) Can you name some consensus algorithms?

Q34) What are hash functions in BlockChain?

Ans: Hash functions take any string of fixed size ( 256 bits in this case ) and generate a fixed size alphanumeric string.

Q35) What are some properties of hash functions?

Ans: They are collision-free Data can be easily hidden. Puzzle friendly.

Q36) Why there is a transaction fee included in the transactions of bitcoin and where does it go ?

Ans: The bitcoin follows the POW protocol, in which some work is to be done by the miners and these fee goes to them as a part of incentive so they can keep doing the mining.

Q37) How will you define the mining?

Ans: Mining is just like a Sudoku game which resets itself every time someone fixes it or finds a solution keeping the difficulty accordingly and block time constant.

Q38) Can you name some details that are sent to the block of bitcoin?

Q39) How do the public key and private key generation work?

Q40) Can you write a smart contract for ‘Hello Word’ in solidity?

Q41) How would you define modifiers in solidity with an example?

Q42) Can you explain the work of modifiers with an example?

Ans: Modifiers are a type of checker in a smart contract that helps the function to execute when the following conditions are met in the modifiers.Like modifiers can be used to check whether

the function can be called from an owner.

Q43) Can you write the example of modifier in the solidity?

A: Yes, here is the example of the modifier.

Q44) Can you write a smart contract that adds/substracts / divide/multiplies the values?

These are the sample Blockchain interview questions and answers which were the complete collection of our own Besant technologies and our trainers create this questions and also the exam related questions for certifications. There are more than 1000+ important questions were created by analyzing the nook and corner of the complete syllabus. Besant Technologies is the best BlockChain training in Chennai and making the students to get complete and detailed knowledge in the course and also providing the online training through Gangboard. For more Blockchain Interview Questions and Answers please do check into our training institute center.