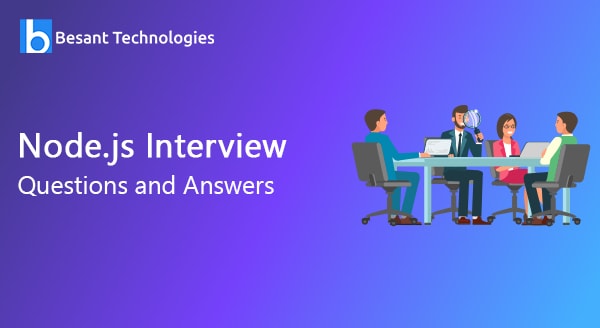 Are you among those who are aspiring to start their career as a Node.js developer? Well, you have landed at the right place. Preparing for an interview without proper resources is a challenging task. If you are preparing for a Node.js interview this would be the right place for you. Advanced planning and prior preparation of frequently asked Node.js interview questions would build confidence in you and help you to nail the interview in the very first attempt.

Node.js is a server-side scripting tool used by millions of developers around the globe. It is very simple and has a very low learning curve. Node.js is a platform built on Chrome’s JavaScript runtime that is capable of building anything right from simple command programs to complex web applications. This is why many organizations have started using Node.js as a scripting language to manage the server-side.

The large corporations such as IBM, LinkedIn, Groupon, GoDaddy,  Netflix, Paypal, and many others are using Node.js. Huge demand and flexible features of Node.js has created huge opportunities for Certified Node.js developers. Let’s get into the top NodeJs interview questions.

Below mentioned is the list of top Node.js interview questions which will help you in cracking the interview and landing in your dream job.

The Node.js is a server-side scripting tool and has got huge popularity because of its efficient, non-blocking I/O model, event-driven, and lightweight. Node.js mainly focuses on performance, it processes the JavaScript code into native machine code and the same is used for executing a process in a system. Although it’s a chrome-based V8 engine its flexible feature allows it to run on any other Chromium browsers such as Brave, Vivaldi, and Opera. Node.js features such as HTTP library, file system API, and utility methods added to the engine during the development.

Q2. What is the procedure to handle ‘Child Threads' in Node.js?

In a wide aspect, Node.js is a single thread process and does not expose any mode of thread management to the developer. But the thing is that the child threads in Node.js will be generated during various stages and one among the reasons is asynchronous I/O. Even though these child threads swap and run in the backdrop they do not create any blockage or hindrance in the execution of the main code.

Q3. What are the major variations between AngularJS and Node.js?

Below mentioned are some of the considerable variations between Angular and Node.js.

Q4. Is Node.js the best platform to work with CPU-heavy apps?

Although Node.js is well suited for server-side application development, the CPU-heavy applications are not that effectively supported by  Node.js. This is because the CPU heavy applications would push the threads into critical executions and create blockages for incoming requests.

Q5. Why do we need the Express JS Package?

Q6. What is JIT and explain the role of JIT in Node.js?

The Just-in-time is a run time component that converts bytecode into instruction and sends it to the processor. Once you are done with the code writing part, the statements of the source language are compiled into bytecode with the help of a compiler.

Just-in-time plays a major role in Node.js. JIT improves the code execution speed to a great extent. It has the capability to convert the source code into machine code during run-time. The regularly called functions are compiled to machine code, which increases the speed of the execution process.

Q7. Name the tasks that can be done by asynchronously with the event loop?

Below mentioned are the tasks that should be done asynchronously with the event loop.

The test pyramid is a diagram that explains the ratio of integration tests, unit tests, and end-to-end tests are required to write for successful completion of a project.

Q9. In Node.js what do you mean by an error-first callback?

In Node.js the error-first callback is responsible for passing the errors and data. In Node.js the very first parameter that you are going to pass through this function must be an error object and the other parameter should be the associated data. The Error-first callback is mainly used to check if anything is wrong and handle it.  If you find no issue you can go ahead with the subsequent arguments.

Q10. What is the main purpose of module.exports?

The role of a module in Node.js is to combine all the relevant codes into a single unit of code that can be later presented by moving all relevant functions into a single file. Let’s consider an illustration here, for suppose you have a file called greet.js that contains two functions like below.

The module.exports use below code to provide two functions that can be imported into a single file.

Q.11 Explain the main difference between ‘front-end' and ‘back-end’ development?

The front end development is nothing but user interface or what a user can see and the ‘back-end’ means the application, server and database which works behind the scenes to provide information to the users.

Below mentioned are the considerable differences between front-end and back-end development.

Q12. What are the core security implementations within Node.js?

The Major security implementations in Node.js are:

Q13. What is meant by callback hell in Node.js?

Q14. What is meant by chaining?

Chaining is a technique in which the output of a stream is tied to another stream and creates a chain of various stream operations.

Q15. Why does Google use V8 engine for Node.js?

Google uses V8 as a Chrome runtime engine that transforms JavaScript code into existing machine code. Besides this, it also offers various other features such as speeds up the application response & process execution and provides you with a fast running application.

Control flow is a code that has been executed between asynchronous function calls. Following are the general steps to execute control flow.

Q17. Draw a comparison between spawn() and fork() methods in Node.js?

Fork(): It is a special instance spawn() and helps in execution of new V8 engines. The core aim of this method is to allow multiple workers to run on a single Node code base for performing multiple tasks.

Q18. What is meant by ‘global objects’ in Node.js?

The name itself resembles is global in nature and presented in every module. There is no compulsion to include them in your application, you can use them directly. The global objects are functions, modules, objects, strings etc. A few of these objects are not actually presented in the global scope but are in the module scope.

Some of the Global objects are:

Q19. Explain the working process of Assert in Node.js?

Assert in Node.js is used to write test cases. It is confined to provide feedback whenever a test case fails. This module provides you with a list of assertion tests that are used to test invariants. The assert is used internally in Node.js and you can also use it in other applications with the help of require(‘assert’) code.

Q20. Explain the use of NODE_ENV in Node.js?

The NODE_ENV variable is primarily used to flag a project when it is in the production stage. This provides clear feedback and in return, it also helps inefficient development of the projects. And the other side using NODE_ENV in production makes the application function 3 times faster.

Q21. What is the main difference between readFile vs createReadStream in Node.js?

In Node.js we have two options to read and execute files that are readFile and CreateStream.

createReadStream: it is quite the opposite of the readFile and buffers partially and considers the overall process as an event series. In this process, a file is split into chunks which are processed and sent back one by one when called. The createReadStream is highly suitable for processing the large files of data.

Q22. What are the different timing features of Node.js?

Node.js comes with a feature called Timer module which has multiple functions that support code execution after a specified period of time. The following are some of the various functions available under this module.

The Punycode is an encoding syntax that is being used to convert Unicode (UTF-*) string of characters into a normal ASCII string of characters. The encoding from Unicode to basic ASCII is important because the hostnames can only recognize the ASCII characters. From the release of the Node.js 0.6.2 version onwards, it has been bundled up with the  Node package. The following syntax can be helpful if you want to use it with the older versions:

Q24. What are the main differences between Node.js and Ajax?

The core difference between the Node.js and Ajax is that the Node.js is a server-side technology whereas Ajax is a client-side technology. To put it simply Ajax is widely used for modifying or updating the content on a webpage without having to refresh it. The Node.js server software can be used on the servers rather than web browsers.

Q25. Is there any ‘Debugger’ option available in Node.js?

Yes, Node.js comes with an in-built debugging client and TCP based protocol. When you want to conduct debugging to your JavaScript file, you can use the following debug argument extended with the js file name.

Q26. What is Exit code and explain the list of Exit codes available in Node.js?

Q27. Explain about an Event Emitter in Node.js

EventEmitter is a class of Node.js which includes multiple objects and possess the ability to emit events.  These objects contain an event emitter.on() function using which multiple functions can be tied to the named events that have emitted by the object. In case an Eventemitter object triggers an event, whatever the functions associated with that particular event are invoked synchronously.

Q28. Will the Node.js support cryptography?

Node.js comes with a module called Crypto which supports cryptography.  The Crypto module provides multiple cryptographic functionalities such as decipher, cypher, verify functions and sign a set of wrappers, etc.

Q29. What is the reason behind keeping the Express ’app’ and ‘server’ Separate?

The reason behind keeping the Express ’app’ and ‘server’ separate is because it separates the API declaration from the network-related configuration, as a result, it will be benefited in the following ways:

Q30. Why do we need console objects?

The console object is used to print data on stderr and stdout.