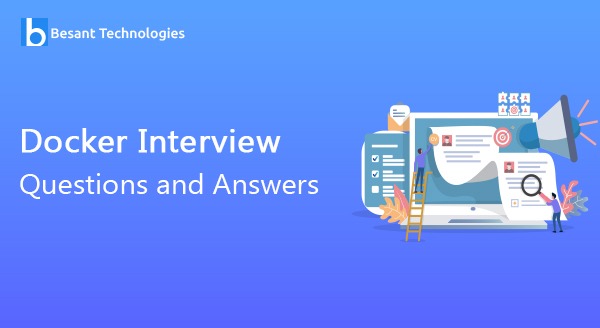 Besant Technologies supports the students by providing Docker interview questions and answers for the job placements and job purposes. Docker is the leading important course in the present situation because more job openings and the high salary pay for this Docker and more related jobs.

Here is the list of most frequently asked Docker Interview Questions and Answers in technical interviews. These Docker questions and answers are suitable for both freshers and experienced professionals at any level. The Docker questions are for intermediate to somewhat advanced Docker professionals, but even if you are just a beginner or fresher you should be able to understand the Docker answers and explanations here we give.
In this post, you will get the most important and top Docker Interview Questions and Answers, which will be very helpful and useful to those who are preparing for jobs.

Docker can be defined as an open-source technology that actually runs on the platform called containerization through which one can establish applications through automating them through containers. Docker containerization is a software with an entire set of things to run the code and it also contains the necessary libraries, tools, etc.,

Containerization can be defined as a package of containers with all needed file system inclusive of tools, libraries etc., to run a script in a open source software environment. Through this technology, one can create scripts in an error-free environment. In previous methodologies, scripts written in one system generates errors while running them in other system. This containerization method eradicate that problem. Some of the environments that use containerization are Kubernetes, Docker etc.,

Virtualization can be defined as building an application, server, memory unit etc., as an implied genre. Through virtualization, one can separate a method to several parts of which every single system could function like an unique system. Segregation of methods is possible through software called Hypervisor.

Q4) How do you define a Hypervisor?

Virtualization can be established by Hypervisor software only. It segregates a system into several sections and assigns to operate every single section to function as a distinct system. Hypervisor will run from the existing system of a host and won’t require a separate OS from a server.

Q5) What are the important components of Docker? Explain.

Docker contains three major components: Client, Host and Registry. Client initiates a program which passes a run command and a build command to the host system. The docker containers and docker images were built and stored in host. These were passed to the Registry to execute everything.

Q6) How Hypervisor differs from Docker?

Open source, user-friendly environment
A developer can run a script developed in one system in other/ scripts developed in one version can be run in another.
Offers well organized basic setup for a user
Users can operate the environment effectively and efficiently.

Q8) What are the Linux platforms that Docker runs? Explain how to install Docker in Linux.

Q9) Does Docker runs only on Linux? State the basic system requirements to configure Docker in that platform.

Docker also runs in Windows platform. To install Docker in Windows platform, the user needs Windows 10 64bit with 2GB RAM space. Docker also runs on older versions of Windows namely Windows 7, 8 and 8.1 with 2GB recommended RAM space, but the user has to enable Virtualization through downloading the toolbox from the docker website. Docker for windows can be downloaded from www.docs.docker.com/docker-for-windows/. The toolbox to run an older version of windows can be downloaded from www.docker.com/products/docker-toolbox/.

Q10) What is the command to install Docker engine in Linux?

Q11) Tell me the command to run Docker container in Ubuntu Linux?

Q12) What is the syntax to display the images installed in the system?

Q13) What is the syntax to remove Docker images?

Q14) State the disadvantages of Docker.

There is no option to reschedule dormant nodes automatically.
Supervising and monitoring is below par. ? There is no provision for storage.
It is very difficult to make horizontal scaling automatically.

Q15) Describe the architecture of Docker.

The architecture of docker will contain a Docket engine runs primarily on a server-client software with following important parts. They are:

The command for docker, which is actually the server with a long run named as a daemon process.
To communicate and command the daemon, REST API is used as an interface.
Another docker command, CLI (Command-line interface)
To direct and communicate with the daemon process through coding, CLI and REST API were used.

Q17) How do you create a Docker image?

Through build command, user could be able to create a docker image. Without a docker image, docker containers cannot be built. A separate registry is created to store all these docker images.

Q19) What do you mean by a docker container?

Q21) Tell me the syntax to run a Docker container.

Q22) What is the syntax to check the top processes in a docker container?

Q23) How to stop the running Docker container?

Q24) How to delete a docker container?

Q26) Define the namespace of Docker.

Docker sperm helps to build the IT developers to create and control clusters of nodes for Docker to function as a separate and distinct system. Docker swarm is actually a tool used in Docker containers to create and administer clusters.

Q30) What are the features of Docker compose?

Q32) How far a Docker is good than the existing container technologies?

Q33) How to start/stop the daemon process?

To start/stop the daemon process, the following commands were used:

Q34) How to attach a container without exiting the existing container?

To do that, the following syntax is to be used.

Q35) What are the instruction commands a docker file carries?

Docker has a list of instruction commands that are present in a docker file. They are:

AUFS: AUFS is a firm driver. If the production team is ready for production activity, AUFS is a perfect driver for that kind of applications.

Device mapper: Another important storage driver is Device mapper, provides enhanced Docker experience to the developers and is a firm driver. Device mapper suits well for service oriented applications like AUFS and ZFS. This driver is used to perform primary functions of Linux kernel.

Q37) What do you mean by Data volumes in Docker? Explain its features.

Q38) How to change the storage driver for a container?

A programmer could be able to change the storage driver for a container using the following command.

Q39) How to create volume in Docker? How to list the volumes?

Docker volume can be created using the following syntax:

The above syntax creates 100MB size volume with some name given. We can list all the docker volumes using the following syntax:

Q40) How to establish communication between docker host and Linux host?

Docker host and Linux host communication can be established using networking. Through Docker networking, one container could be able to communicate with another and also with the host. The bridging between docker host and linux host can be filled by identifying the “ipconfig” on the docker host. This command will let you know the ip address of the

docker host. This Ethernet adapter will be created while docker is installed in the docker host.

Q41) How do you create your own Docker network?

For example, the command may be:

This created network has to be attached to the container while launching it.

Later, we can check whether the container is attached to the newly created network.

Q42) What is Node.js? Whether Docker supports Node.js?

Node.js is a widely accepted and famous framework among the developers to develop server-side applications. It is a framework in Javascript and is available open-source which runs on various OS. Since Node.js become popular, Docker assures better support for the developers to use it in Docker.

Q43) What is MongoDB? Whether Docker supports MongoDB?

MongoDB is a well known and widely accepted database by IT professionals for development. Recent day web apps are built using MongoDB data base. Because of its popularity, Docker ensures support to MongoDB to be used with it.

Q44) What do you know about NGINX?

NGINX is a well-known user-friendly web app that can be used on the server-side to develop web applications. NGINX is available open-source at free of cost. This web server is designed to operate in a wide variety of OS. Because of its demand and growing popularity, Docker also ensured its support to the NGINX web server.

Q45) What do you mean by Docker Cloud?

Docker Cloud is additional support provided by docker through which the developer could perform several operations. They are:

Nodes: Through Nodes, the user can connect the Docker cloud to the already prevailing clouds such as AWS. Azure etc., through which containers can spin on top of these cloud environments.
Uninterrupted integration: Through this feature of the Docker cloud, the user can communicate with Github to avail uninterrupted services one after the other sequentially.
Software Deployment: Through this, the user can start an application and Docker containers.
Cloud Repose: In Cloud repose, a user can keep repositories created by them.
Uninterrupted Deployment: User has the facility to automate their applications.

Q46) What is the syntax to login to the cloud repository?

docker login – Through this syntax, users can enter their credentials to log in their own cloud repositories.

Q47) What do you mean by Daemon Logging and Container Logging? Explain.

Docker supports logging options through which a developer could troubleshoot errors easily once it occurs. Logging could be at the Daemon level or at the Container level.

Docker also allows logging at the container level. It can be done using the following command:
sudo docker run –it ubuntu /bin/bash
After this command, use the docker log command with the specific ID of the container to check the containers for errors.
Sudo docker logs 45dfgh6asdf

Q48) What is Jenkins? Can it be used with Docker?

Q49) What do you know about Kubernetes? What is its relation to Docker Containers? Explain.

Kubernetes is a special supporting feature to be used with Docker. This framework allows Docker containers to establish communication with the real world. Kubernetes allows Docker containers to establish multiple services at a time. Let’s say for an example, assume we contain two services, among which one service contain MongoDB and NGINX and other services contain REDIS and NGINX. Among these services, an IP is distributed through which they can be connected with other applications in the real world. Kubernetes can control all these services.

Q50) State the advantages of Docker.

Users can easily configure and converse with Docker.
User-friendly interface and Open source environment.
Efficient and flexible scripts can be built with version interchange features.
The primary setup is very easy.