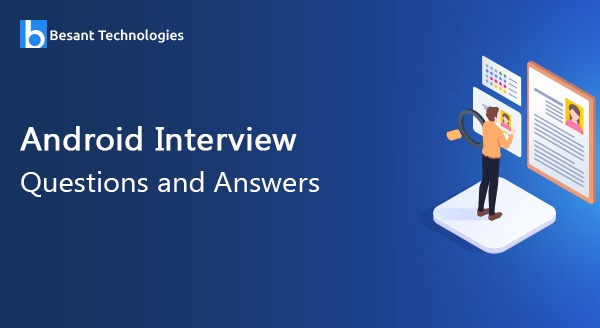 Besant Technologies supports the students by providing Android interview questions and answers for the job placements and job purposes. Android is the leading important course in the present situation because more job openings and the high salary pay for this Android and more related jobs.

Here is the list of most frequently asked Android Interview Questions and Answers in technical interviews. These Android questions and answers are suitable for both freshers and experienced professionals at any level. The Android questions are for intermediate to somewhat advanced Android professionals, but even if you are just a beginner or fresher you should be able to understand the Android answers and explanations here we give.

In this post, you will get the most important and top Android Interview Questions and Answers, which will be very helpful and useful to those who are preparing for jobs.

Android SDK is an efficient set of tools to write an app or develop a mobile application. This tool has a Graphical User Interface emulating an android environment. This kind of an emulator stands out to be an actual mobile where the developers can write the code and test the written the code.

Q3) List out the different Android version along with its name.

Q5) What are the layers in the Android architecture?

Q6) If you start a new project in Android, what are the required components?

The components essential to start a new project in Android are build/, res/, manifest, assets/ and src/.

Services, Fragment, Activity, Content Provider and Intents are the core components of Android.

An android component that runs in the background and acting autonomously without providing any user interface are called services. As the services is recognised to run in the background, users can easily access any apps and continue to perform their own work.

Q9) What are the different states of Activity Lifecycle in Android?

The different states of Activity Lifecycle in Android are given below:

When there is a need for a user to navigate from one activity to the other one, Android is holding the Intent class. Intent is the one that displays notification to the users from the device and if required, users can act on that notification.

The intents that calls the system components are called Implicit Intents.

The intents that invoke the Activity are called Explicit Intents.

Q14) What is the use of permission setup in app development?

Only the authorized users are permitted to use the code and data once the permission setup is completed in app development.

Q15) Mention the database which is used for android platform

Android platform make use of SQLite database, which is a serverless and open-source database.

Q16) Give the abbreviation of ANR

ANR – Application Not Responding. The Android platform displays a pop-up when too many functions are performed by the application at a time and at times, users will not receive any response from the system. Such kind of a pop-up notification is called ANR.

Q17) List out the dialog boxes supported by Android

Q18) What is the abbreviation of ADB?

Orientation which is available in smartphones these days provides the ability for screen rotation. Users can rotate the screen between vertical or horizontal mode.

Q20) How many types of orientations are available in Android?

There are two (2) types of Orientations are available in Android, namely Portrait and Landscape.

Q21) What is the method used to set the orientation?

The method used to set the orientation is ‘setOrientation’ and this can easily set the screen configurations.

Q22) What is the method used while changing the orientation from one to the other?

The method ‘onCreate()’ is used while changing the orientation from vertical to horizontal or vice-versa.

Q24) Give the abbreviation for AIDL

AIDL – Android Interface Definition Language. This is used to simplify the communication between service and the client. Also, the inter-process communication can be used to pass the information.

Q25) List out the data types which are supported by AIDL

Map, String, Data types of Java, charSequence, and List are the data types supported by AIDL.

Q26) What is AndroidManifest.xml file in Android?

Before running an app code, every android system should ensure to have AndroidManifest.xml file in the root directory. This file contains information on Android components like Content Providers, Activity, Broadcast Receivers, Services, etc and the package name.

Few tool names used for debugging in Android are given below:

Q28) What are the mobile automation testing tools in market?

Robotium, Appium, Calabash, and KIF are the free automation tool. SeeTest, Silk Mobile and Ranorex are the paid tools.

Q29) Provide few details on how to troubleshoot android apps when the users faces the crashing regularly.

Users must free up the memory space and then must clear the usage of app data. Try to manage the memory often and perform compatibility testing using different mobile devices.

Q30) If there is a leak in memory, how will you find it in an Android mobile app?

Android Device Manager is used to detect the memory leakage on all Android mobile apps.

Q31) What is the abbreviation of DDMS?

DDMS stands for Dalvik Debug Monitor Server, which is a debugging tool used by Android Studio.

Q32) Is it possible to debug on both emulators and real devices with the help of DDMS?

Yes, it is possible to debug on both emulators and real devices with the help of DDMS.

To measure motion, orientation and few other conditions of an android devices, we do have a feature called built-in sensors.

Q35) What are the sensor categories available in Android devices?

Q36) Provide the Java classes available with respect to the Android sensors.

SensorEvent, Sensor Manager, SensorEventListener and Sensor are the Javaclasses available with respect to the Android sensors.

Q37) What is the abbreviation of NDK?

If you want to use the native language like C or C++ to develop a part of an app, NDK is very much helpful.

Q39) What is the abbreviation of APK?

Q40) What is the abbreviation of ADT?

ADT – Android Development Tool, which is useful in developing and testing the applications.

Q41) In Android, which kernel is used?

Q42) In Android, what are the flag types used to run an application?

If sleep mode is ON, CPU is made to sleep and no commands are accepted from android devices, excluding alarm and radio interface layer.

Q46) What is the reason for not running bytecode in Android?

Q47) What are the Launch modes available in Android?

SingleTop, SingleInstance, Standars and SingleTask are the four (4) Launch modes available in Android.

If there are long running operations from main thread, Thread is used to separate those to improve the performance.

To manage threads, handlers are used. Handlers permits the communication between main thread and background thread. Users prefer handlers when there is a need to perform background task frequently for a given intervals in minutes.

Q50) What are the services available in Android?