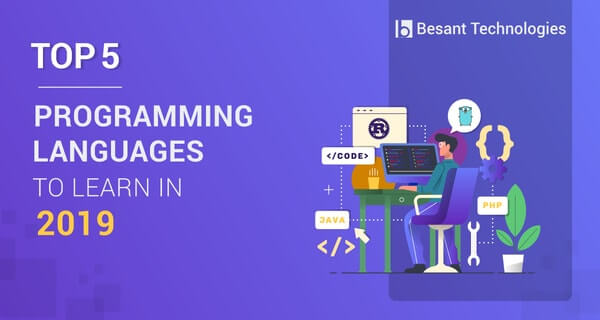 Top 5 Programming Languages to learn in 2021

Top 5 Programming Languages to learn in 2021

Python programming language is by far the most popular programming language demanded by online recruiters as well as corporate offices. This language is used for web development. Developers also use python as a support language, which increases its scope and utility. Other than its use in web development and as a support language for software development, the language is used in machine learning, scientific computing, and data mining. Due to its vast application, learning this language can be very rewarding for an individual.

JavaScript plays an essential role in front-end web development to implement dynamic logic to a page. JavaScript is a programming language for the web; developers use the language for front-end as well as back-end website development. It is essential that you learn this programming language because 95 percent of websites run on JavaScript. As a web developer, you may not get any work if you do not know the language.

This is an ancient language among all programming languages. Over 28 million developers around the world know Java programming language. Java is popular due to the flexibility it provides to a developer while developing desktop and web applications. However, lately, the language has become even more popular due to the development of Android apps using Java. The language is ubiquitous, be it Twitter, Facebook, Amazon, or other. It runs on all operating systems.

When it comes to age, C++ is even older than Java. C++ is used in application development of any device or area. The programming language is used in firmware development, game development, or for client-server applications. This is difficult to learn a language; however, if you learn the language you can develop just about anything. Microsoft, Bing, Yahoo, and other giants in the tech space use the language on their website.

It can be incredibly difficult to reach the top in a competitive world...

It can be incredibly difficult to reach the top in a competitive world...

TCS Salaries in 2021: Check Out the Latest Salary Updates on TCS You...

Salesforce Admin Salary in India for Fresher and Experienced

Starting a career in Salesforce is a profitable choice in 2021. Being a...

Salesforce Developer is responsible for the organization or startup companies growth and lead...

Data is something you use all the time. In today’s world, data is...

Are you looking to start an exciting career in the tech community? You're...

Software Tester Salary in India for Freshers and Experienced 2021

With the exponential growth in the number of mobile apps and other technologies,...