Home Blogs General What is the use of self in Python? 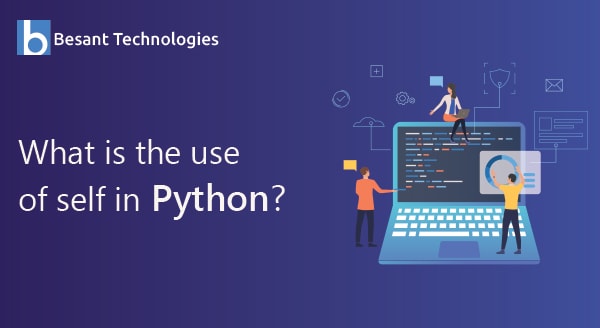 What is the use of self in Python?

Once you start learning python, you will come across the term “self”. The keyword called “self” is for using the attributes and methods in a class. Here, in this article, let’s us understand in-depth about self and know when to use it. ‘However, before that, let us know the topics we will be covering here:

Why use self in python?

Now, getting back to our main topic. The self is for accessing the attributes and methods of the class. It binds those attributes with the argument. In python, we can use methods to pass instance automatically, but not receive automatically.

Is It Important To Use Self In Python?

You can also use self to refer to a variable field within the class. Let’s have a look at an example.

Here, the self indicates the variable (name) of the class( school). The name is variable is used only when the method is running and local only to the method. If you want a global variable declaration, then declare it outside the class.

Now, let us move on to understand whether the self is a keyword or not.

Is the self a keyword?

No!! Self is not a keyword. In a function, the self is a parameter and the user can use any other parameter instead of self. However, it is better to use self as it is for boosting the readability of code.

With this, we have come to end our tutorial in self. If have any doubts or require any clarification, then, don’t hesitate to contact us.