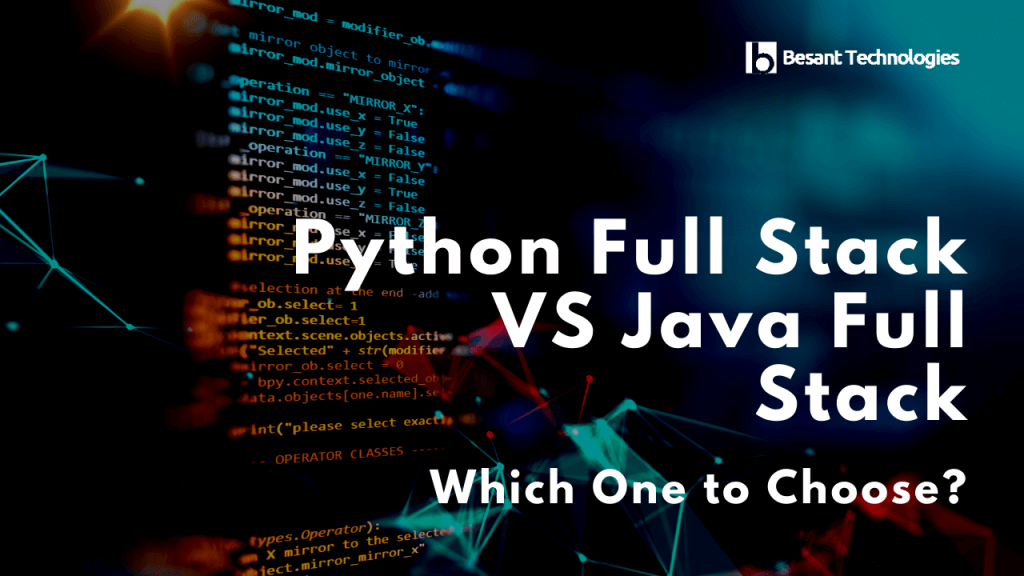 Coders looking for a lucrative career in the present-day scenario are often found wondering, “Python full stack vs Java full-stack- which one to choose? Which one is actually better?” Well, here we try to weigh the pros and cons of these two so that you can decide on which area to dive into for better career prospects. But before we get into an in-depth analysis, let’s first try to understand what a full stack developer is.

So, Who is a Full Stack Developer?

What Roles and Responsibilities Does a Full Stack Developer Shoulder?

Who Is a Java Full Stack Developer?

A Java full-stack developer is essentially a web developer having great expertise and in-depth knowledge in full-stack tools and frameworks compatible with Java.

For smooth development of web apps, they need to be proficient in the Java suite of technologies. The technologies include core Java, servlets, REST API, and certain other tools.

The Merits of Learning Java-

Who Is a Python Full Stack Developer?

When such technologies, tools and frameworks mastered by a web developer are python based, they are referred to as a python full stack developer. However, let’s not assume that a python full stack developer would never require knowledge in any other language or technology. It’s highly advisable that all beginner level web developers make themselves proficient in at least HTML, CSS and JS.

The Merits of Learning Python?

Python Full Stack VS Java Full Stack- Which One to Choose?

One thing that needs to be noted here is that both of these programming languages are leading in the market. So, it’s crucial that we compare the two based on certain important parametres. Such a comparison will be able to throw light on how they are different from each other and which one would be best suited to your requirements. We have considered the under-mentioned parameters for the comparison. Have a look-

Well, both the languages boast of their respective active global user bases. Group meets like PyLadies, where woman coders come together and code, are organized by python users spread across the globe.

Java also has numerous Java User Groups (JUGs) that hold JavaOne and other such high-profile events.

Learn Java from the Basic to Advanced Level with Hands-on Training, Placements, and more with
Java Training in Chennai

The syntax of Python is considerably easy. Nonetheless, it’s a dynamic language. There are no indentation rules, meaning it is well suited for beginners. Codes written in Python are also easy to read.

On the other hand, Java is a little more complicated with stringent syntax rules. The rules are so strict that a program fails to run when there is even a small error in the code.

Since, both Python And Java are cross-platform in nature, they run on almost the same types of operating systems. Here, you might be tempted to think that both have similar performances, but there are differences, the most important being- with Java, bytecode compilation is faster and easier than with Python. Also, Java coding is less susceptible to errors. It is also speedier and more efficient.

However, there are some downsides to it. For instance, Java codes are lengthy and hence, may be extremely difficult to understand. Python, on the other hand, is best suited for lengthy programs.

Learn Java from the Basic to Advanced Level with Hands-on Training, Placements, and more with
Java Training in Bangalore

Generally, all full-stack developers earn well. If you have expertise only in the frontend or backend, you might not be able to make as much money as full-stack experts do.

According to Payscale data, the average salary for a Full Stack Java Developer in India is INR 624,000. Whereas, it’s INR 337,037 for Python.

Even after having compared Java full-stack with Python full stack against so many parameters, it remains difficult to declare which one has a clear edge over the other.

While Java has always been a popular choice, Python ceases to lag behind considering how widely it is used globally. Python is so widely used that even those who are not from the development industry use it for organizational purposes. Talking about Java, it is considerably faster than Python. Also, as we have seen above, Java full-stack jobs are comparatively better paying. But then Python has proved to be a preferred choice for lengthy programs.

So, in the overall “Python full stack vs Java full-stack” debate, which one eventually wins is hard to say, as it completely depends on the program a developer intends to build. Still, we may safely conclude by saying that Python is a great choice for you if you have just entered the world of web development. On the other hand, if you are looking to primarily develop enterprise-level programs, then Java should be your first choice.