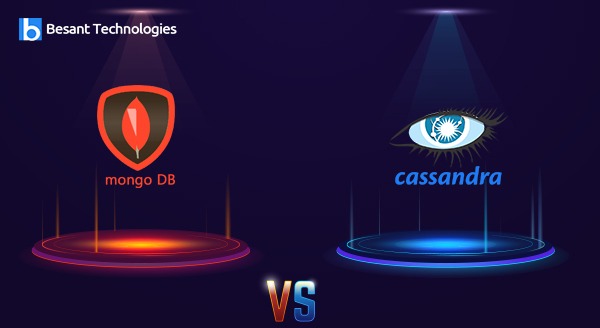 Both Cassandra and MongoDB aim at storing data with the different methodologies adopted. Cassandra uses a near similar element to database tables, whereas, MongoDB stores data, using documents.

Cassandra or for that matter Apache Cassandra is one of the most popular as well as an effective open source distributed database system, which mainly helps the users to design to store and it also aids in managing a vast number of data across commodity servers. According to the data storage system it is seen that Cassandra can serve both as an operational data store and the best part is it will also going to the read-intensive database which is helpful for any type of large scale business acumen.

MongoDB is an open source database management that calls for document intended database model, supporting several types of data. It is one of the innumerable none relational database technologies that came into force in mid-2000 under the NoSQL patronage. Instead of using rows and tables in relational databases, MongoDB architecture is comprised of documents and collections.

Similarities Between Cassandra and MongoDB

Before embarking on the main topic of discussion, you may cast a glance at the common factors that find a place between Cassandra and MongoDB.

Cassandra and MongoDB are both open source.

Both are databases and have been effective for nearly a decade by now. Cassandra came into existence in 2008 and MongoDB in 2009.

Lastly, both databases are compatible with Windows, Linux, and macOS.

Differences Between Cassandra and MongoDB

It is basically a traditional model, consisting of a table structure that includes rows and columns. The data is more structured and the column has a specific type. This type is entered during the creation of the table.

It constitutes a rich and expensive data model which is objective oriented or data oriented. This particular data model can easily access any data structure in the user domain. The relevant data might bear properties and can be nested in each other for multiple levels.

While considering Cassandra vs. MongoDB, Cassandra has a cluster that accommodates master nodes. The multiplicity master nodes are a unique feature i.e. if one node goes down, it is filled in by another node. The cluster remains undisturbed and remains available always.

It bears cursory support for the secondary index. These indexes are confined to single columns and display equality comparisons. The application pursued is hampered by flexibility in terms of secondary indexes in the query model.

If you take note of Cassandra vs. MongoDB, MongoDB possesses high-quality secondary indexes that enable indexing any property of the data stored in the database in an efficient manner. This property makes it easy to query.

By now, you should have got the idea that Cassandra does have multiple master nodes. The master nodes are used to input data in other nodes. It is then obvious that the more the master nodes in a cluster, the better the chances of its scaling.

Also, you are well aware that MongoDB has only one master node. Thus, the input is received by a single master node. All other slave nodes are used for output. Following this, if the data is to be written in the slave nodes, the same has to go through the master node.

As you know in Cassandra vs. MongoDB, Cassandra has it’s in the house query language. It is called CQL. This is quite similar to SQL.

As of now, MongoDB is not supported by any query language. In MongoDB, the queries are structured into JSON fragments.

Cassandra is devoid of any built-in Aggregation framework. It seeks external assistance in the shape of various tools such as Apache Spark, Hadoop, etc.

MongoDB carries a built-in Aggregation framework. It is used to run an ETL pipeline to transform the data stored in the database. This framework is conducive to small and medium data traffic. Also, there is a demerit. While passing the data through the ETL pipeline, there erupts traffic congestion. Resultantly, the framework starts facing difficulties to debug.

Cassandra facilitates static typing. Prior to that, the user is required to define the type of the column in the beginning.

In MongoDB, the user has the freedom to alter the enforcement of any schema on the database. Each database can be a distinct structure. Only the program or application can interpret the data.

Now based on their performances, both Cassandra and MongoDB need a hair to scour analysis:

According to the database, the performance centers on schemas. A few schemas fit in well in Cassandra and some in MongoDB.

So far as bulk data load input, Cassandra does have an edge over MongoDB. On the other hand, in case of heavy data load output, both are at par.

It depends on the input/output reinforcement of either of the two databases. The quantum of intake and discharge is directly proportionate to the consistency.

The benefits of MongoDB are that the complex data can be easily treated because of the JSON format support provided. This is an added advantage for MongoDB when you compare it with Cassandra. On the other hand, Cassandra can be considered the best database when a large amount of data is involved and in terms of query execution speed and optimization are factored in. So, while comparing Cassandra vs. MongoDB, you will find they have their respective advantages depending upon the requirements and the volume of data to be dealt with.