1998 Ratings (5.0)
If your wish is to learn the Android Development Course in Hindi then approach the best Android Training Institute like Besant Technologies. As learning is more associated with language and comfortability we provide the best learning experience. The android operating system is highly used in Smartphones, cars, TV, and wearables. Android Studio in Hindi explains about the development environment in terms of a layman. 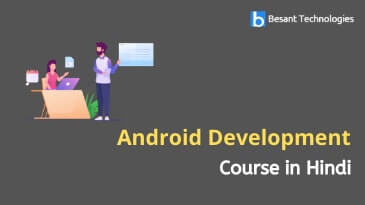 The top two best android phones as of 2020 are Samsung Galaxy S10 plus and Oneplus 7T. App design course Hindi trains the learners in designing an app for the latest device hardware and software structure. Trainers are good in understanding cutting edge designing, programming, and challenges associated with the Android App development market.

Which language should I learn and practice to become Android developer Job?

What are the frameworks of Android?

What are the advantages of using Kotlin language for Android development?

Kotlin has statically typed language nature for JVM and it is available at open-source option. As it can be interoperated with Java it becomes easy to update old java apps to Kotlin.

Besant Technologies provides flexible timings to all our students. Here is the Android Development Training in Hindi Class Schedule in our branches. If this schedule doesn’t match please let us know. We will try to arrange appropriate timings based on your flexible timings.

My name is Mohammed. I have 10 years of experience in Android development. I work with Android SDK, UI designs, threading, performance tuning, design application as per the User interface, integrate Google maps and Google play services, android libraries, and use cloud message APIS. My teamwork with different layers of android application and integrate the layers with the back end services. I would like to meet a student with an interest in Android development. I provide the training from the intense knowledge through professional experience. This Android Game Development Tutorial in Hindi is more from the practical side to make learners as experts.

Hi, my name is Manoj. I am interested in learning Android development and I aim to become a versatile developer in all the sides like development, design, testing, and deployment. My trainer gave me doubt sessions and sit along with me for all the assignments. After I got clear with all the concepts he gave me the project which boosts my confidence to work independently. Working knowledge is very crucial as organizations expect employers to be skilled enough to handle independently. I thought theoretical knowledge is not enough and practical knowledge is very essential for Android developer Profile. Now I got placed in an MNC company. For low profile jobs book knowledge is enough but for high profile jobs, practical knowledge is very important. My Android Course in Hindi with Besant technologies was very helpful for me. Thanks for the Android training.