1878 Ratings (5.0)
Besant Technologies’ Ethical Hacking training in Bangalore provides Certified Ethical Hacker Certification or CEH( Exam code for CEH Version 10 – 312-50) which enables us to analyze as well as understand computer security procedures through which corporate firms can be protected from any malicious data breaches.  Through Besant Technologies Ethical Hacking Course in Bangalore you get the certification that examines how much a student can use tools of penetration system so as to test systems in computer and security network and implement the same for ethical hacking. 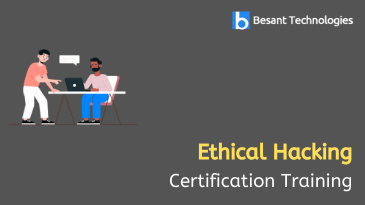 About Ethical Hacking Course in Bangalore

Ethical Hacking Course in Bangalore is offered by best institutes and through this extensive placement oriented training, aspirants learn current strategies that are used by efficient hackers to write virus codes. Through this training, you can learn about major tools that are used to penetrate inside the network and secure the company infrastructure. Real-life projects, scanning processes, testing and hacking processes-all are taught by efficient trainers in Ethical Hacking Certification Course in Bangalore.

Syllabus of Ethical Hacking Course in Bangalore includes analysis of advanced network packet, the security of all web servers, any threats in malware and studying of recent process penetration testing strategies which ultimately helps in building strong network security. The regular salary of a Certified Hacker is $70,000 per year and increases with experience! There are efficient trainers who are actually based and connected to the industry who trains these students and give them job oriented training.

What you Learn from this Ethical Hacking Course Training

There is a lot to learn from Ethical Hacking Course in Bangalore as it promises job support to each and every aspirant there. Here is a small sneak peek into what you learn;

Who should go for the Ethical Hacking Course?

Besant Technologies provides Ethical Hacking Training Course in Bangalore that helps a student become an efficient ethical white hacker and one who wants to help the rest of his or her team against any cyber malfunctioning or attacks. Learning this Ethical Hacking Course they have the power to make the system confidential. The ones who aspire to become an efficient hacker can be;

What are the prerequisites for Ethical Hacking Course?

One who wants to get into proper Ethical Hacking Course needs to know the basics of cyberlaw first. It is required for him/her to have basic knowledge in computer programming. It is not necessary to have prerequisites but knowing Networking language, Linux and data management, and Scripting will be an added advantage. If you go through some major case studies and projects, as you learn the ethical Hacking Course, you will get a clearer picture of the changing trends of the hackers now.

It requires your interest in the Ethical Hacking Course and if you learn the basics of networking, you are into it. Keep in mind to get trained from top institutes providing Ethical Hacking Training Course in Bangalore. If you do not have an idea of the above scripting languages, we at Besant Technologies will teach you from the starting of the course.

Why should go for the Ethical Hacking Course?

Ethical Hacking Training Course in Bangalore says that these days cybersecurity has become one of the major segments in any company. With the world changing its norms every day, today most part of the world runs digitally. Thus, experts are needed who can keep these clever hackers at bay.

In this Module, you will learn about the basic syntax and structure of Python Programming. You will be getting a complete understanding of Python Basic Syntax and Installation of Python

Learning Objective: in this section, we are learning about the Networking CCNA basic Configuration

Learning Objective: In this section, we are learning about basic Java Script Topics:

Learning Objective: In this section, we are learning about basic Linux shell Scripting

Learning Objective: In this module, we are learning about the Hacking by tool and Coding

Try it out, on us

Take the first step in your learning journey. Get hands-on experience and be a master. Buy 3 course @24,999/-

Besant Technologies provides flexible timings to all our students. Here is the Ethical Hacking Training in Bangalore Schedule in our branches. If this schedule doesn’t match please let us know. We will try to arrange appropriate timings based on your flexible timings.

Educate employee's in form of learning programs means in turn the success of your business/organization.

Find your next job with Besant

400+ Students getting placed every month from startup to top level MNC's with decent package after doing course.

Placement record Get your job

Join in a group of three or more on same course we will be delighted to offer you a group discount.

Ethical Hacking Course in Bangalore smartly introduces the topic of ethical hacking where aspirants get information on major historic data breaches around the country and understand how these security attacks and hacks actually happen. Here are the key features;

Ready to jump-start your career

Join the course, Get your resume modified from experts. Our students are being hired at the leading companies.

How are projects important for Ethical Hacking Course?

The reason why you need to LearnEthical Hacking Courses because you get to interact with efficient instructors providing real-time projects to you. Through best project support students get the upgraded, most relevant and unique real-life projects which a major part of this is training. With this, you can actually implement the techniques that you have learned in the actual industry setup. All these training are backed with multiple projects that exclusively test the skills, practical as well as learning knowledge thus making aspirants ready for the industry.

Projects in the segments of high technology, sales, and marketing, E-commerce, networking, banking, and insurance are given to students. As you complete the projects carefully and successfully your skills are considered through effective evaluation.

Through Ethical Hacking training in Bangalore, you will complete most live projects through the usage of various techniques and tools of ethical hacking. Projects such as network penetration process, analysis of virus and Trojan generation, injection of SQL are major segments.

Through all mentioned above, the final conclusion stands herein that you have to get certified from Best Ethical Hacking Training in Bangalore to get placed wonderfully. Ethical hacking is a new trend and if you get bets training from experts, you can even get placed internationally too. It depends upon the institute and the syllabus and also the mode you are studying through. Payments are done through easy modes and there are EMI systems too which help in easy studying.

I completed the Ethical Hacking Course in this institute. Faculty here are very much patient enough to hear your doubts and clarify it in a precise and clear way. The best thing is with the good coordination of the organizers and the faculty that doesn’t lead to confusion to the students about the daily schedules of the class. From my side, A Very Good Institute for Ethical Hacking Training.

I have completed Ethical Hacking at Besant Technologies Bangalore. My trainer was Mohan sir. The trainer explained each and every topic very clearly with hands-on experience on topics. He is Very well knowledgable. Thanks to Besant Technologies for giving these wonderful opportunities.

Are you looking for exciting offers?

Why should I learn this course from Besant Technologies?

We have a dedicated placement portal which caters to the needs of the students during placements.

Who is my trainer and how are they selected?

Our trainers are more than 10+ years of experience in course relavent technologies.

Trainers are expert level and fully up-to-date in the subjects they teach because they continue to spend time working on real-world industry applications.

Trainers have experienced on multiple real-time projects in their industries.

Are certified professionals with high grade.

Are well connected with hiring HRs in multinational companies.

What if I miss a session?

What are the different modes of training that Besant Technologies provides?

What certification will I receive after course completion?

How about group discounts (or) corporate training for our team?

What are the payment options?

I have more queries?

Stay in the loop