Matplotlib is one of the famous Python packages; it is for data visualization. One of the popular use of python is for data analysis; matplotlib.pyplot is a python package, which is used for 2D graphics.

There are many dependencies of matplotlib,

In addition, you can install number of other packages for better user interface toolkits.

As we have seen above, matplotlib is widely used in data analysis. Data Scientists usually work with large data sets and they want a way to visualize their data for better understanding and to gain more insights about the data

Even a person with no knowledge of the data set can understand by just seeing the visuals. An image can represent 1000 unspoken words.

How to Import Matplotlib?

Once you have successfully installed the package, then you are ready to proceed further to visualize your data.

It is widely used across various industries like biology, sports, finance, and many more. It is used mostly used on continuous data, to see increasing or decreasing trend, patterns etc.,

First, we have to import the required packages. Here, I have imported matplotlib and numpy. Matplotlib is for visualization and numpy is for value generation.

After importing the packages and assigning values to variables, we want to plot the data. Usually, a normal line plot required two inputs, here we have created x and y which can passed as inputs. Finally, we have use show() to display the plot. If the above code is executed, the output will be as follows, 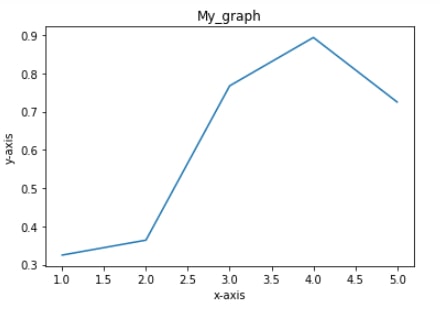 Bar charts are used to displays values, which are categorical with rectangular bars with lengths or heights. The bars can be either vertically plotted or horizontally plotted. It is used for comparison purposes. plt.bar() function is used to plot bar plot 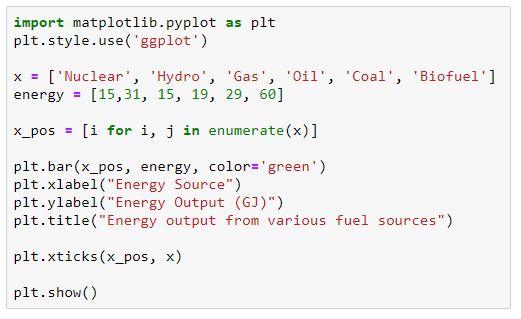 I have created two variable x, energy and assigned values to it. Then, I am looping the value of x using enumerate and storing it in x_pos. 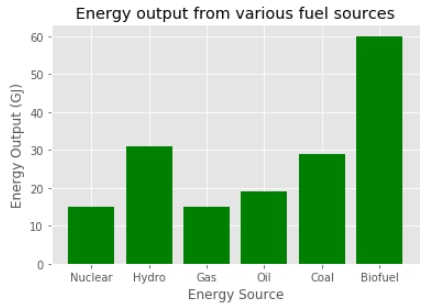 Scatter plots are used to plot data’s on horizontal axis and vertical axis, to show how one variable is affected by another variable 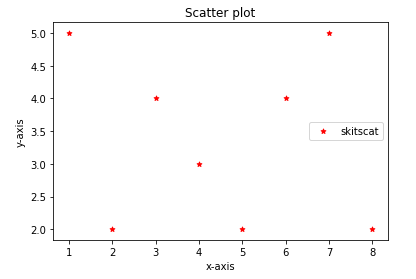