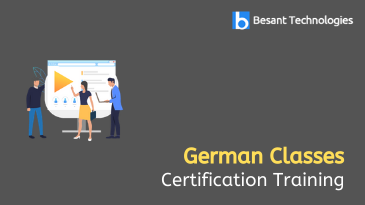 Available 24x7 for your queries

In every German Class in Chennai batch, we include only a single digit candidate. We make our student master in German alphabets, vocabulary, grammar and prepare them frame sentences and phrases of their own. Even we conduct interactive sessions, debate, group discussion among students and also we make some expert speakers participate in discussions. All these will help candidates to practice in the class itself. We motivate our students in all possible ways to get the complete knowledge of the subject. The German language is so easy when we practice it regularly just like the English language.

We have our branches spread across different areas in Chennai and state. We have 10+ branches in Chennai and all branches in the state near to corporate areas. Students who are put up near to Chennai areas like- Velachery, OMR, Porur, Anna Nagar, T-Nagar, Thiruvanmiyur, Siruseri, and Maraimalai Nagar. By taking this as an opportunity student or business, people can efficiently utilize their free time in learning this language in a customized way. We even provide online training to distant or busy students.

Besant Technologies provides flexible timings to all our students. Here are the German Training Classes in Chennai Schedule in our branches. If this schedule doesn’t match please let us know. We will try to arrange appropriate timings based on your flexible timings.

Try it out, on us

Take the first step in your learning journey. Get hands-on experience and be a master. Buy 3 course @24,999/-

Syllabus of German Classes in Chennai

Educate employee's in form of learning programs means in turn the success of your business/organization.

We have German language trainers from globally reputed foreign language institutes. We have a pool of tutors who take one on one or group classes to business people and students who are busy with their schedules. We provide customized based training to our students. Our tutor often speaks to our students in German language and make them habituate to talk in that language and correct them wherever. Conduct various interactive sessions and rectify the students’ doubts. We repeat each session until students get the topic. We even conduct tests to our students at the end of every concept, so that students can practice it and clear their doubts.

Find your next job with Besant

400+ Students getting placed every month from startup to top level MNC's with decent package after doing course.

Placement record Get your job

At the completion of the course, we provide a certificate to our students by conducting various levels of exams. We make our students confident enough before they leave our institute. Our trainers and students are spread across the world; we conduct interactive sessions with them even after the completion of the course for some specific period so that students may not forget the rules of the language and helps them to be fluent in the German language.

Join in a group of three or more on same course we will be delighted to offer you a group discount.

Ready to jump-start your career

Join the course, Get your resume modified from experts. Our students are being hired at the leading companies.

Stay in the loop

Take the next step

Tell us what you’re looking for. Our expert team will help you find the best solution.

What is the German Language?

German is the lingua franca in Europe than any other language in the European nation. It’s also an official language of many countries such as- Switzerland, Austria, Liechtenstein, and Luxembourg. It’s the native languages of a vital portion of the population in northern Italy, the Netherlands, Denmark, eastern Belgium, eastern France, the Czech Republic, Russia, parts of Poland, Romania, and in other parts of Europe. Most of the people in the world consider German as a second language, it stands the second most popular language in Europe and Japan next to English. It’s the third most popular foreign language which speaks worldwide.

In interactive sessions, we conduct group discussions, just a minute session with a group of candidates. It helps students to clear every concept and speak like a native speaker. We even provide placement assistance to students who want to pursue their career as a German language tutor. We have a separate job portal for Besant technologies students to grab the exciting opportunities in their field with ease. Fast Track, Weekday and Weekend Batches to meet your timeline constraints